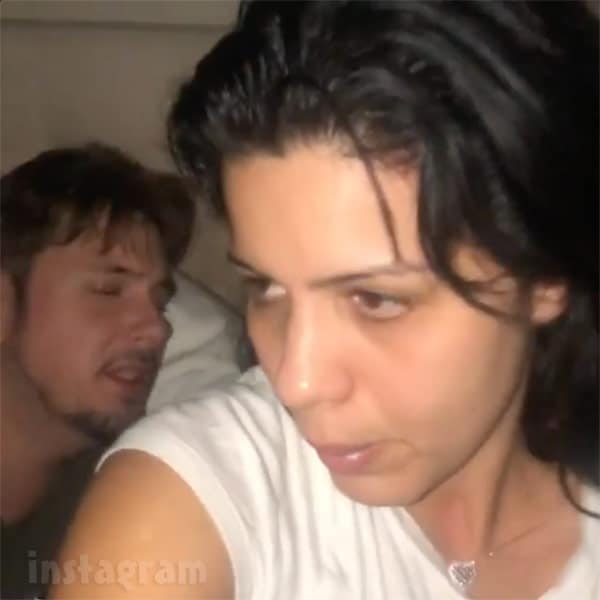 The volatile relationship between 90 Day Fiance stars Colt Johnson and Larissa Dos Santos Lima continues, and appears to have escalated to the point where the two of them had a bloody physical altercation and the police were called once again.

Just like the moments leading up to Larissa’s previous arrest for domestic battery in November, she documented everything leading up to the police arriving late Thursday night or early Friday morning. Going by what Larissa posted, the altercation began after she found receipts for pornography purchases made by Colt through Many Vids.

Things apparently got out of hand, and both Larissa and Colt sustained facial injuries. Larissa injured Colt by scratching him and causing his mouth to bleed, while Colt allegedly attacked Larissa’s face, causing what looks to be a rather serious cut on her cheek. (I say allegedly with Colt and not Larissa because Larissa admits to scratching Colt.)

Larissa posted the following graphic photo of her bloody face along with the text “unfortunately Colt called the cops.” 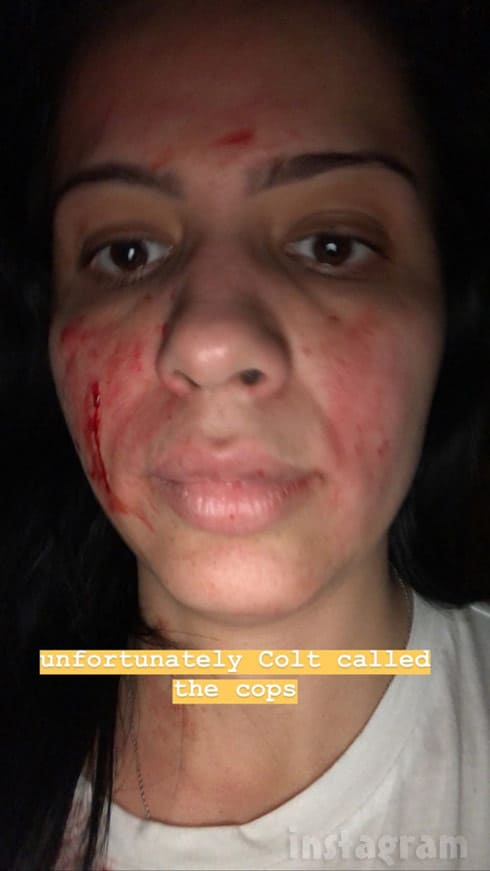 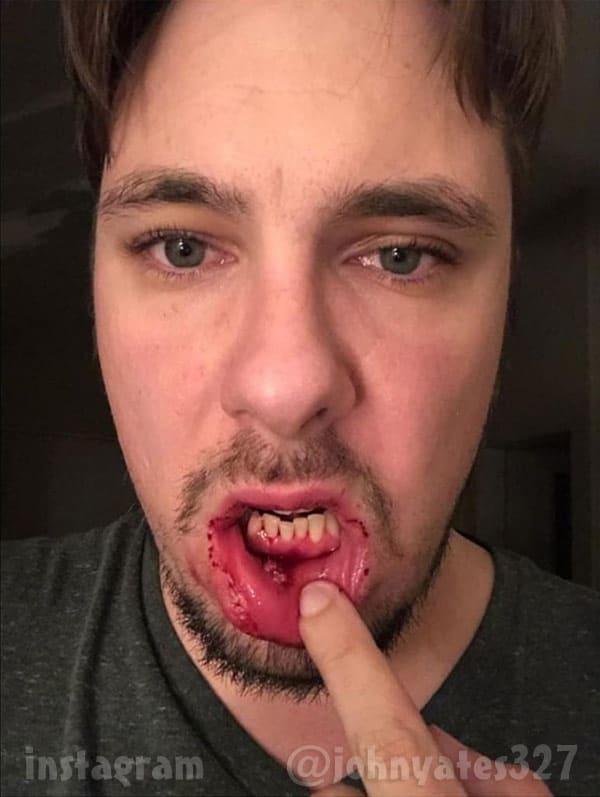 Colt’s Instagram is currently deactivated, so that photo is the only thing we have from his point of view.

Getting back to Larissa — she posted a series of photos that she says are receipts for Colt’s purchases of several adult videos in late December. She then shared a number of disturbing videos that look to have been recorded outside the couple’s home in which her face is still bloody as she reveals that Colt called the police and that she would be deported. She says that she scratched Colt, but only because “he was hurting me.”

“As you see, I’m really hurt but he called the police first,” Larissa continues with a sense of desperation. “I need an attorney, please, I need someone to help me.”

Larissa also shared a video in which she claims to be naked in the shower as Colt stands in the bathroom doorway looking at and scrolling on his phone. It’s hard to make out what Larissa is saying on the clip.

Judging from the timeline of Larissa’s posts, it appears as though she was not arrested as she continued to post well after revealing that the police had been called. (Photos of police at their house were posted online, confirming they were there.)

Larissa shared a photo of a cut fingertip and claims that it was an injury she got from Colt a few days ago. She also says that he is suicidal and attempted to kill himself. Here is that photo followed by Larissa’s caption:
them he was trying to find a way to deport me
them he got tonight after abuse me for pours
including try to molest me putting his finger in my a****
please I need help

She later shared the same photo again and added: 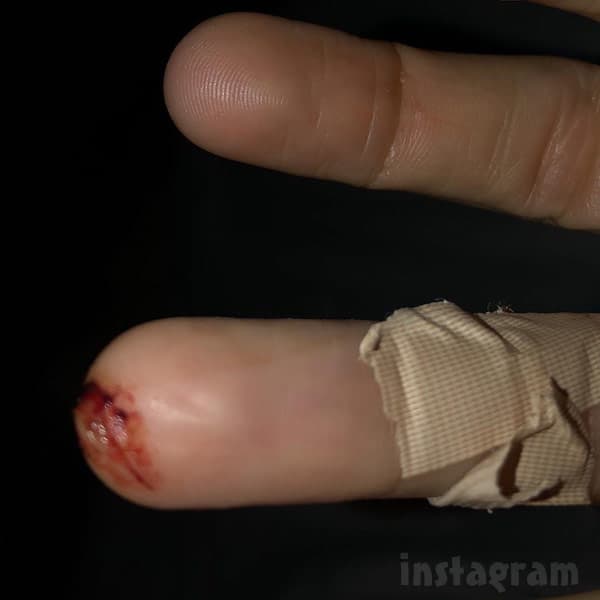 Next, Larissa posted a video in which she appeared to have shaving cream on her arm and leg. She would later repost the same clip and wrote “how it [escalated]” in the comments, so I am guessing these are clips from earlier in the evening prior to the physical fight that caused the injuries. That was followed by another video in bed with Colt as she she says repeatedly “Look at that bruise.” Colt can be heard saying “I want to go to bed” and later “I didn’t touch you.”

In a video that Larissa quickly deleted, she can be seen getting on the bedroom floor where she tells Colt she plans to sleep. “Why?” Colt asks. “Because I am done,” she says. “Done with what?” Colt asks.

After a pause, Colt laughs. “Why are you doing that? It’s ridiculous.” Larissa remains quiet as the phone continues to record from the floor. “Larissa you scratched my face really bad and I hurt. You think that’s alright?” Another long pause. “I’m sorry that you’re mad at me.”

In another deleted clip, Colt pleads with Larissa. “You abuse me all the time. You make fun of me, you say I have a small dick, you say I smell bad. What do you want from me? Tell me.”

Larissa doesn’t respond to Colt, but instead addresses the camera. “I record because when he saw the camera he start talking different.”

After posting an alleged DM conversation between Colt and another person in which Colt offers a “picture of Larissa’s butt in a hot tub” because he “was thinking of releasing one through unofficial channels,” Larissa shared this text message conversation that she says was between her and Colt “minutes ago the fight:”

Larissa’s lat post was photos of what look to be a record of audio recordings from December to January. It’s unclear what they are, but given the context, I assume they are allegedly between Colt and another woman? I will not include the photos because they reveal information about the couple’s address.

I am very surprised that neither Colt nor Larissa was arrested. Both of the previous incidents seemed to have less evidence of a physical altercation than this one, and both times Larissa was arrested and charged despite the fact that Colt didn’t want to press charges.

At this point, it really doesn’t matter if Larissa might get deported — this relationship needs to end. Now. THANKFULLY, there are no children involved. Yet. However, Larissa has talked about bringing her children to the US from Brazil, and I was (am) really getting worried that we were (are) going to get a pregnancy announcement soon.

Colt and Larissa are reportedly filming for 90 Day Fiance: Happily Ever After, which I’m sure is serving as extra motivation to stay together — something Larissa has stated many times. I like drama as much as the next reality TV fan, but I am not looking forward to watching this play out on TV at all.

UPDATE – John Yates has shared two additional photos of Larissa, including one of the cut on her face and another of her receiving medical attention at a friend’s house. “Larissa is safe and at her best friend Carmen’s house getting medical care,” John wrote. 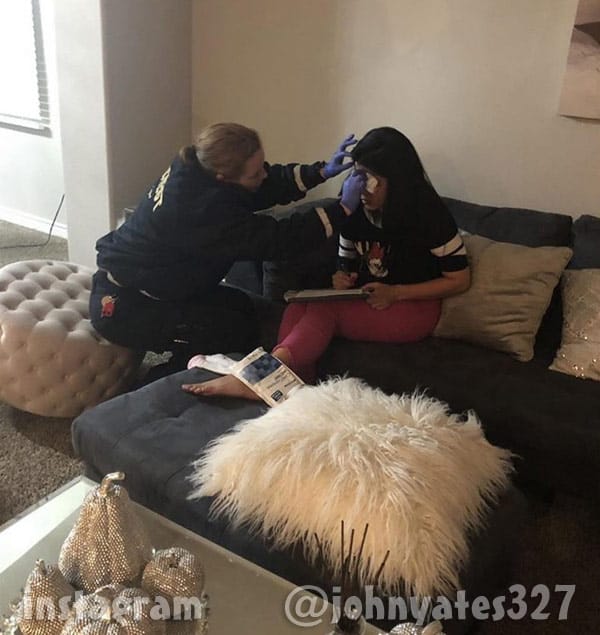 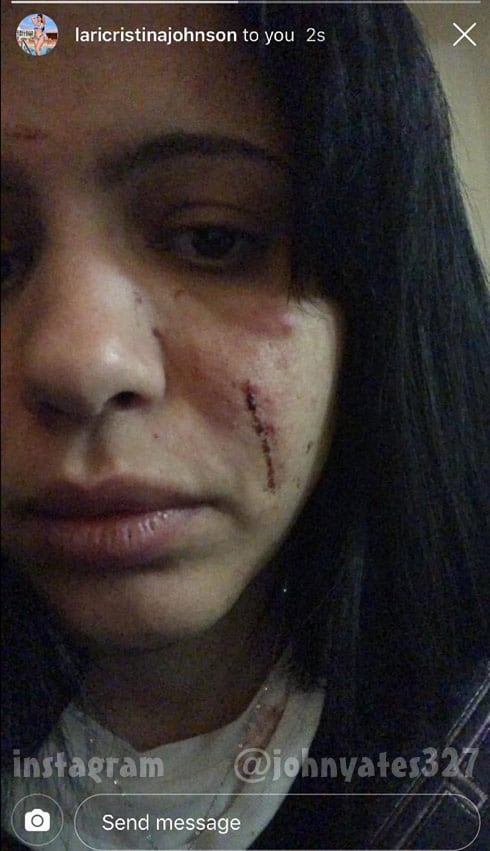 UPDATE – Larissa shared the photo above getting medical attention and added the following:

I was nervous thinking about getting arrested today because when I tried to call the cops, Colt took my phone and called the cops on me. Thank God, this life of abuse and manipulation is over.

I received medical help and I am safe at my friend’s house.

UPDATE – Larissa has been arrested and charged yet against with domestic battery. Police on the scene determined that Larissa’s injuries did not appear to have been caused by Colt and may have been self-inflicted. This time it looks as though Colt will not be bailing Larissa out of jail, and there has been a GoFundMe campaign started to help raise money for bail and legal fees. Click the link for all the latest!