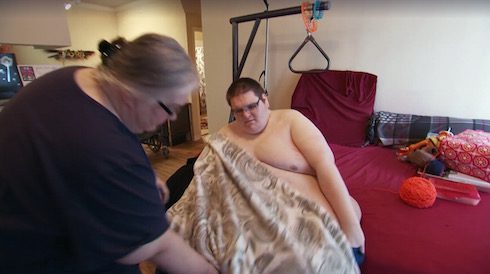 After a sleeve bypass operation helped him lose a third of his peak weight in the first My 600 Lb Life Sean episode, things seemed to be looking up for the 25-year-old. But the latest Sean Milliken update is an unfortunately tragic one: Renee, Sean’s mother and his primary caregiver, recently passed away at the age of 57.

Sean’s peak weight of 900 pounds made him the heaviest person ever featured on My 600 Lb Life upon his introduction in Season 4. And the first My 600 Lb Life Sean episode made clear the enabling dynamic between Sean and Renee: his mother, by her own admission, overfed Sean when he was a boy in order to “compensate” for the terror Sean felt from his verbally abusive father.

By the end of his 2017 Where Are They Now? follow-up, Sean had lost an impressive 300 pounds thanks to a sleeve bypass operation. But his weight loss progress had stalled out, due in part to what Dr. Nowzaradan suspected were Renee’s undermining ways.

Unfortunately, a multitude of new reports since then have confirmed Renee’s death from kidney disease last summer. Inquisitr‘s recent update on Sean cited “personal accounts from the Millikens’ family friends” confirming Renee’s death — and even quoted one such friend who actually attended the funeral.

That friend, an active My 600 Lb Life fan group admin named Steven Johnson, intended to dispel some of the fan gossip about Renee — namely, that she was a kinder, gentler person than she sometimes came off on the show:

I was at her funeral and can tell you this woman had the biggest heart of anyone I’d ever met. She always stepped up to help anyone, whenever anyone had any need she volunteered….She helped with the children’s program at her church. She discussed going on the show with her pastor. He said they would embarrass her, they would do things to make her look like a terrible person. Her response to him was ‘I would do anything they asked if they help my son’ and as you can see from the show, she lived up to that. Sean says he is doing okay-ish and just trying to figure out his next steps.

Additionally, it appears that Sean has deleted all of his social media accounts and largely disappeared from the internet since his mother’s death. Hopefully, Sean’s extended absence from the public eye will help him grieve for his mother and work through everything he needs to figure out in order to get himself healthy — both physically and mentally.

Our condolences to Sean and to the entire Milliken family. Fans and first-time viewers can stream the first My 600 Lb Life Sean episode here, via TLC.

Snooki doesn’t “see the harm” in tanning, will allow her son to fake bake