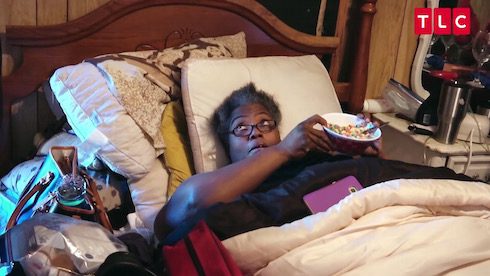 Last night’s episode of My 600 Lb Life featured what may have been the most controversial participant in the show’s long history — and yes, we’re including Steven Assanti in that estimate. Fan outrage over the My 600 Lb Life Lisa episode shows no signs of slowing, thanks to Lisa’s stubborn approach and manipulative ways.

First, there was the media buildup for Lisa’s episode, which featured the alarming detail that Lisa knew she needed to get help with her obesity after finding maggots growing in the folds of her skin.

Then, the teaser clips featured two harrowing stories. The first showed Lisa eating a bowl of Fruit Loops in bed while paramedics shored up the wheelchair ramp outside of her home — and then showed a team of six paramedics hoisting her from bed to an ambulance. “Hit me, Daddy!” Lisa shouted, to general disbelief.

The second, embedded below, was of Lisa telling of the time her mother once forced her to eat an entire cake as punishment for swiping a bit of frosting:

But it turned out that those details were only the beginning. The My 600 Lb Life Lisa episode displayed plenty more: Lisa appeared to keep ice cream around as a reward for her boyfriend performing sexual favors; she threatened to commit suicide when Dr. Nowzaradan refused to take her complaints seriously, only to have psychiatrists determine she was no threat to herself. Lisa also — after some initial success — refused to follow her diet, going from 704 pounds at the beginning of the show to 617 at her lowest and 646 by the My 600 Lb Life Lisa episode’s end.

Ultimately, even Dr. Now lost patience with Lisa, calling her “manipulative” (the same conclusion her psychiatrists reached) and kicking her out of the weight loss program.

So social media’s response to Lisa Fleming should probably come as no surprise. For starters, here are a few responses from our own Facebook feed, where Lisa’s episode generated way more conversation than usual:

“I get so angry when I think of how much treatment and medical care [Lisa] got and then wasted,” said one commenter. “There are so many other people who only want a CHANCE to be treated by Dr. Nowzaradan. Hundreds of thousands of dollars to bring her to Houston via Bariatric ambulance, provide her with nutritional help, physical therapy and psychiatric help. None of that seemed to mean anything to her. When it got near the end of the show and she accused Dr. Now of disrespecting her, that was when I had to turn it off.”

“I have been watching this series for many years,” began another. “I have never before disliked a participant more than this week’s….I don’t like this lady clowns every time she is trying to distract from the situation and try to bring attention to how ‘cute’ and needy she is.”

And a third commenter said simply, “”I thought the Assanti brothers were horrible, but this lady beats even Steven Assanti.” But she was hardly the only viewer to think so; one response to *that* comment read “Yes! This woman was the straw that broke the camels back!! Dr. Nowzardan deserves a special reward for what he does because I couldn’t do it!! She definitely beat the Assanti brothers!”

It turns out that the sentiment was much the same on Twitter — where Lisa got arguably even less mercy, and where the comparisons to Steven Assanti were more forceful:

I'm still reeling from #my600lblife last night. Like why even waste TLCs time and money and our time if you're not gonna even try? I hope Lisa watched that episode last night with her daughter and saw what type of person she actually is. Tho she will blame TLC and editing.

I just can't be sympathetic with her…what a mess…she is crazy! Wow…TLC should not have even televised this. Shame on her playing w/folks. #my600lblife

I wonder what was going on behind the scenes to make Dr. Now not even put her in the hospital to get her weight down again? I've seen him give others more chances. She must've been really acting up #My600lbLife

Lisa is definitely in the Top 5 for most annoying on this show thus far. Assanti is still #1 ?#my600lblife

Lisa and Steven Assanti need to have their own episode. Herbert and Cupcake can chill together. #my600lblife

Lets put Steven and Lisa in a room together and see who gets fed up enough first to lose weight and get out. #my600lblife pic.twitter.com/Ui9XJIZ5kg

In case you missed Part One of the My 600 Lb Life Lisa episode, it’s now available for streaming. Part Two is scheduled to air Wednesday, February 28th, at 9 PM on TLC.