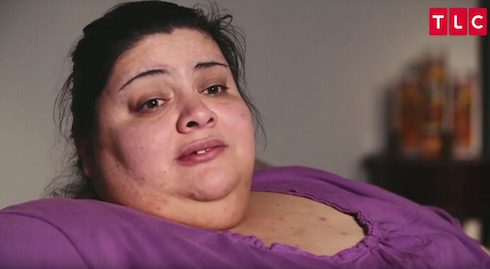 Karina Garcia has come a long way since TLC’s cameras began filming for her My 600 Lb Life episode. The 38-year-old Texan’s introductory weight was 633 pounds, and her eating was out of control even with a gastric balloon. Since then, Karina has lost over a third of her weight, continues to drop pounds, and even has plans for skin removal surgery.

Karina explained that the severe asthma she suffered as a young girl got her plenty of attention from her family — and that she used the comfort of food to replace the attention when her health improved and her parents had to work long hours to pay Karina’s medical bills.

“When I was younger and in the hospital, everyone paid attention to me, and now it was like I didn’t exist at all,” said Karina, who weighed 100 pounds at age 10, 250 pounds at age 15, and over 400 pounds at age 23. “But I really just wanted a little attention. I wanted a hug, but they were too busy to give it, so food was my hug….Before school and with my allowance, I would buy junk food: chips, soda, cookies, cupcakes. Food was always there to comfort me no matter what.”

Fortunately, it sounds like Karina’s been doing a great job staying positive and maintaining her weight loss since the My 600 Lb Life Karina episode finished filming: her total weight loss has now surpassed 235 pounds. (Karina’s before and after photos can be found here.)

And in a new interview with Newsweek, Karina described her plan for the rest of 2018, saying, “My goal right now is to lose as much weight as possible this year so I can get skin removal surgery by the end of this year.”

While Karina does still live with her parents, she’s trying to bring that chapter of her life to a close as quickly as possible: “I am hoping to be out of my parents’ house pretty soon and back to work.”

In addition, Karina’s short-term goals include getting around without a walker and being “able to do stuff that I stopped doing, like traveling.”

Karina added that she’s gotten used to going without her favorite foods, especially since she’s replaced them with one new one — “I never used to like to eat fish,” Karina shared, “but now I like to eat fish.” And she had nothing but praise for Dr. Now, who she credited with getting her on the right track. “He has helped me do what I need to do in order to lose weight, and he has helped me get my life back,” she said.