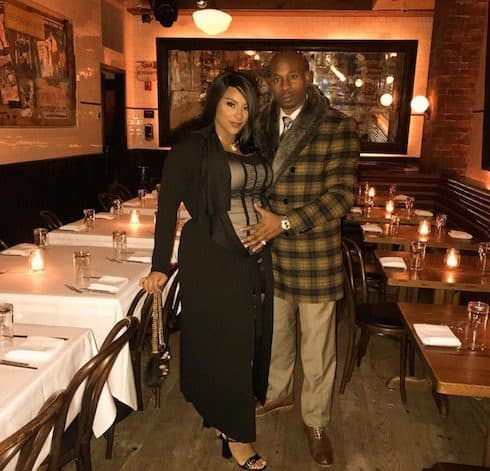 Now that their first season is coming to a close, the official LHHNY Ashley and Navarro storyline may be just about done. But the two are just getting ready for their off-camera drama to begin: on the first part of the reunion special last night, Ashley and Navarro updated fans on her pregnancy, confirming that they are expecting a baby boy.

Then, immediately after the episode had aired, Ashley took to Instagram to share a second update: a still from her most recent ultrasound, which she had at 29 weeks. Based on that info (the ultrasound also says Ashley is in her third trimester), it sounds like Ashley has about 11 more weeks to go, meaning fans should expect a birth announcement right around the time of Ashley’s own late May birthday:

My beautiful baby he has such an angel face ??can't wait to have him in my arms oh and he looks just like me ! ???? ?? Para que No le den Mal de ojo a mi Babi (Sana sana culito de rana si no se sana hoy se sana mañana) ❤️?

Fans who’ve been following the LHHNY Ashley and Navarro pregnant storyline on social media have been charmed and delighted by Ashley’s frequent pregnancy updates. She’s not at all afraid to share plenty of details about the wonders and weirdnesses of pregnancy — in fact, the updates have been coming even more regularly now that she’s into her third trimester:

Congratulations again to Ashley and Navarro! Hopefully, we’ll get to see a bit of their baby boy’s first days in this world when filming for Love & Hip Hop New York Season 9 begins this summer 🙂

The second part of the LHHNY Season 8 reunion special airs Monday night at 8 on VH1.