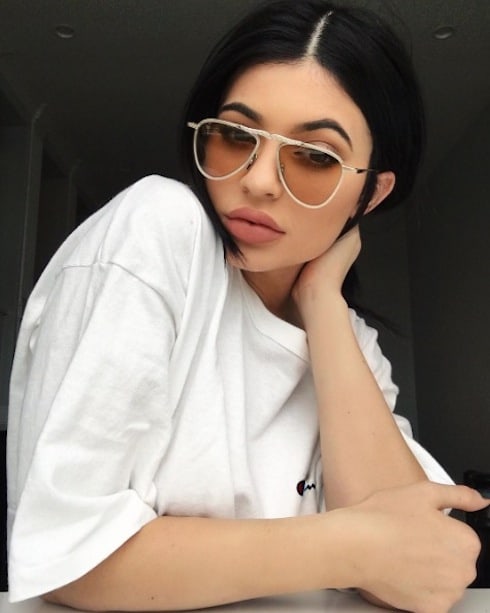 Plastic surgery stories dog Kylie Jenner wherever she goes–and the rumor of Kylie Jenner lip injections is the latest such allegation to hound the 18-year-old budding fashion maven. Kylie’s been trying to fight back public perception of her growing lips for week, and has just taken to social media to try and win more converts to her side.

According to Kylie, who’s been accused of all manner of plastic surgery over the past two years, she keeps her lips pursed for photos. Given how often there’s a camera in Kylie’s face (and, sometimes, it’s even one that she’s put there), she thinks it should be understandable that her lips always look giant.

“Everyone thinks I keep making my lips bigger,” Kylie said, addressing the Kylie Jenner lip injections gossip head-on. “But, this is them normally…”

“…and then this is when I, like push them out, [and] do my little face,” she said, making a sort of duck face if the duck’s lips had absorbed a twin:

“The fact that we still even talk about my lips is so crazy,” concluded Kylie.

Last fall, on an episode of Keeping Up With The Kardashians, Kylie admitted to having temporary lip fillers. Then, in a later interview, she detailed her lip regimen: “I still do Juvéderm for my lips,” she explained. “I go to Dr. Ourian in Beverly Hills. He’s the best, and he’s super natural about it,” she explained to the publication. “I was going to somebody before, and it was just looking crazy.”

Kylie also claimed that she’s a fan of the short-term alteration, since it allows her greater flexibility. “I would recommend that anyone who gets it done go for a filler that lasts only two to four months,” she said. “It’s annoying to keep going back, but you have the option of stopping it.”