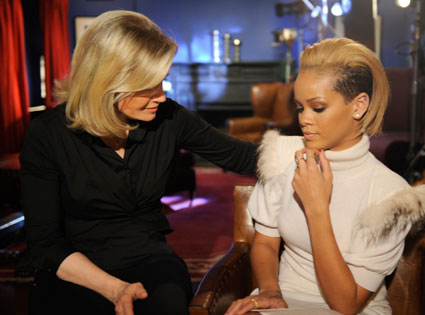 Rihanna is a shockingly gorgeous girl, and she’s even more beautiful during her intimate two-part interview with ABC’s Diane Sawyer. Thursday we saw Rihanna tell women everywhere to “Eff love.” She very openly admitted how in love and obsessed she was with Chris Brown, but now she’s embarrassed by that blinding kind of love, and regrets ever going back to him. Rihanna didn’t stay with him long after the night of his brutal attack, she has since cut ties with him and pressed charges. It is now illegal for Chris Brown to come in contact with Rihanna for five years.

But Rihanna doesn’t just give a word of warning, tonight’s interview with 20/20 gives more details about that horrific night that started with a blissful evening at an awards ceremony and ended with Rihanna beaten, bloody, and broken. Rihanna remembers seeing “no soul” in Chris Brown’s eyes while he was attacking her and kept wondering when it was ever going to stop.

Chris Brown isn’t too excited about Rihanna’s interview, and because he couldn’t tell her himself, he spoke to MTV about his opinions. Here’s his statement:

“While I respect Rihanna’s right to discuss the specific events of February 8, I maintain my position that all of the details should remain a private matter between us. I do appreciate her support and wish her the best. I am extremely sorry for what I did, and I accept accountability for my actions. At this point, I am taking the proper steps to learn about me and grow from my mistakes. I only hope that others in similar situations can learn from our experience as well. Abuse of any kind is always wrong. The rest I leave it to God.”

As the police reports states, at some point Rihanna had difficulty breathing. When Sawyer brings up the fact that many people are actually blaming Rihanna for getting battered the night of February 8, Rihanna attributes that kind of thinking on ignorance.

Rihanna grew up in a household of domestic violence, with her mother being brutally attacked by her father. Rihanna shakes her head as she said she always told herself that kind of thing would never happen to her.

She says she went back to him because she was worried about his state of mind. She ended the relationship after Miami, mainly because she was upset over the message she was sending young girls. Some of her young fans were sending her messages about their own abusive situations, and she couldn’t bear the fact that young girls might emulate her decision and get themselves hurt or killed. She got annoyed with Chris’s very presence and broke it off.

Rihanna has still not heard the song he wrote for her, “Changed Man.” During her interview with Diane Sawyer, she saw Chris’s recorded apology that swept the internet for the first time, she wasn’t impressed noting that he was probably reading from a teleprompter. She says Chris, like most men, does’t truly realize the depth of what he’s done. Thankfully, Rihanna probably hasn’t heard or seen this little gem yet.

But does Rihanna think Chris’ legal punishment was appropriate? No, but she thinks it was a little too much, and she doesn’t want it to interrupt her work life.

Rihanna still loves Chris Brown, and finds it “annoying” that she still has emotion for him.