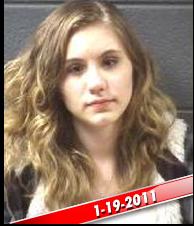 16 & Pregnant‘s latest episode featured Jamie KcKay, whose baby daddy Ryan McElrah was a stand-out d-bag of the series (and that’s hard to do.) Jamie is seeking sole custody of their daughter Miah because Ryan McElrath is a hard parties on cocaine and booze, and has multiples arrest under his belt.

Unfortunately, Jamie has the most recent arrest. TMZ reports that she was booked January 19, 2011 for punching her classmate twice in the head. Charges were later dropped, but she still has a lingering mug shot to prove that she pulled somewhat of a Jenelle.

Right now we still don’t know the outcome of Jenelle’s vicious beatdown (that was caught on tape, and involved a web of set-ups, deceptions, and all-around craziness,) and Amber Portwood recently turned down a house-arrest plea deal for her felony domestic violence charge against her baby’s daddy Gary Shirley. Will the 16 & Pregnant / Teen Mom violence never stop?

The TMZ story also notes that Jamie’s baby daddy Ryan McElrath has also been arrested three times, most recently on November 30, 2010 for assaulting a female (not Jamie) and resisting officers.