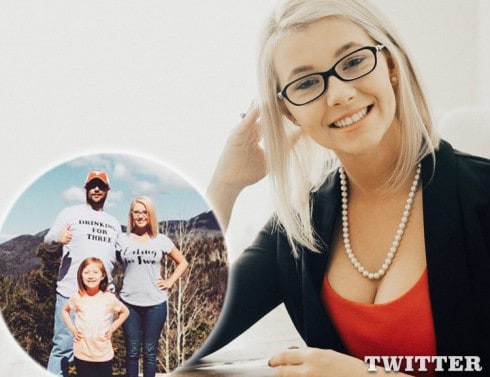 Lindsey, whose arrival of daughter Aniyah was documented on 16 & P, announced earlier this month that she was expecting. She and husband TJ, who has legally adopted Aniyah, were obviously excited about the good news. Now the realtor from Lubbock, Texas has shared that she’s got two on the way.

She posted via Instagram, “When the ultrasound tech said she would be right back, mine and TJ’s hearts dropped. I told him ‘something’s wrong.’ She came back in and said, ‘Y’all are having twins!'”

The former cage fighter, who made headlines when she underwent breast augmentation surgery with Dr. Miami, also provided updates to her fans via Twitter:

-> Its ALL TJs fault he’s a twin himself. Lol

-> Found out from my grandma that twins do run on my side of the family. So with them on Tjs side & mine it was just inevitable.

-> I had no idea so many doctors won’t handle patients with twin pregnancies ? time to find a high risk specialist now ????… I had a really high risk pregnancy with my daughter and was on bed rest so I’m sure that’s not helping with twins.

Lindsey feels strongly that she’s going to have boys and has already picked out names. “Jackson James & Jameson Lee ?? can’t wait to meet my babes,” she wrote.

Good luck to Lindsey, TJ and Aniyah as they eagerly await the new additions to their growing family!

Lindsey Nicholson’s daughter Paisley to have surgery tomorrow, new info on cause of liver problems