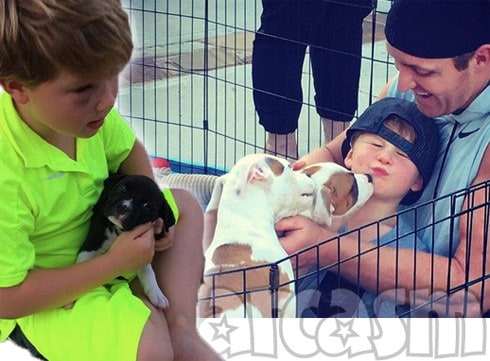 Kim Zolciak is helping her son Kash move on from a frightening dog bite to his face with the help of some super adorable puppies!

In late April the Real Housewives of Atlanta star shared the terrifying news that her 4-year-old son Kash Biermann had been hospitalized after being attacked by a dog. Now she’s reintroducing him and his brother Kane to pups thanks to Atlanta’s Bosley’s Place, which specializes in neonatal orphaned puppies.

“Kroy and I felt it was super important to continue to encourage Kash to be around animals. Kash is an absolute animal lover and I didnt/don’t want him to fear animals after all he has been through. (The 2nd day he was in the hospital their was a service dog visiting all the children and I asked Kash if he wanted to see the dog, “He screeched Yes” and was all snuggled up to the dog in less than a minute as if nothing ever happened!) Anyhow I wanted to thank @bosleys.place for bringing all your precious sweet (adoptable) puppies over and sharing them with us. ?? ”

Kim’s shares, as these often do with celebrities on social media, has received a split reaction as many have applauded her desire to reintroduce loving dogs to her son while others have been critical of what they consider to be a dangerous proposition.

Will Nene Leakes and Kim Zolciak be back for Season 3 of Real Housewives of Atlanta?