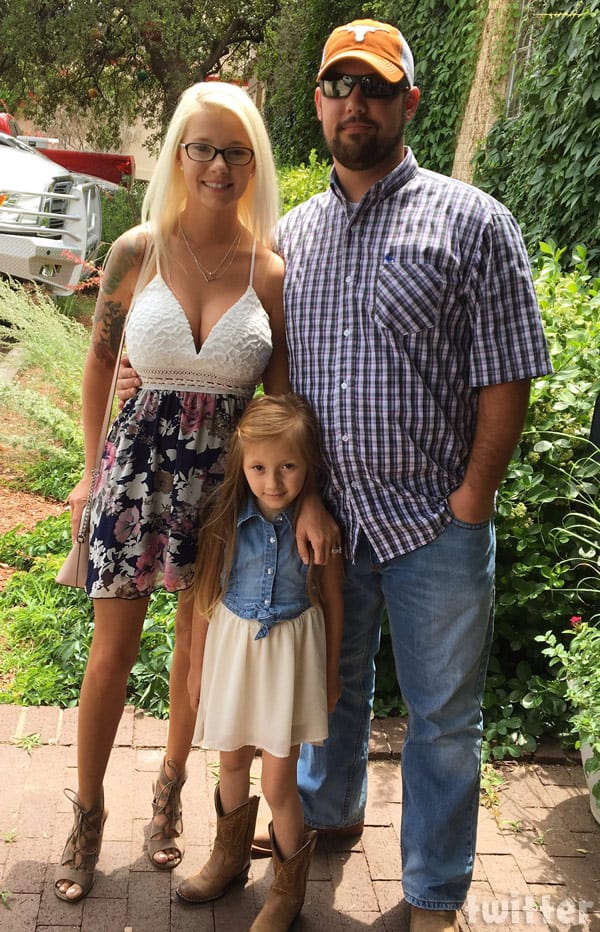 It’s been a little over four months since 16 and Pregnant star Lindsey Nicholson (formerly Lindsey Harrison) made the trip down to Florida for a complimentary boob job courtesy of Dr. Miami, and since then, she has been showing off her newest assets online in a series of bra-popping snaps. 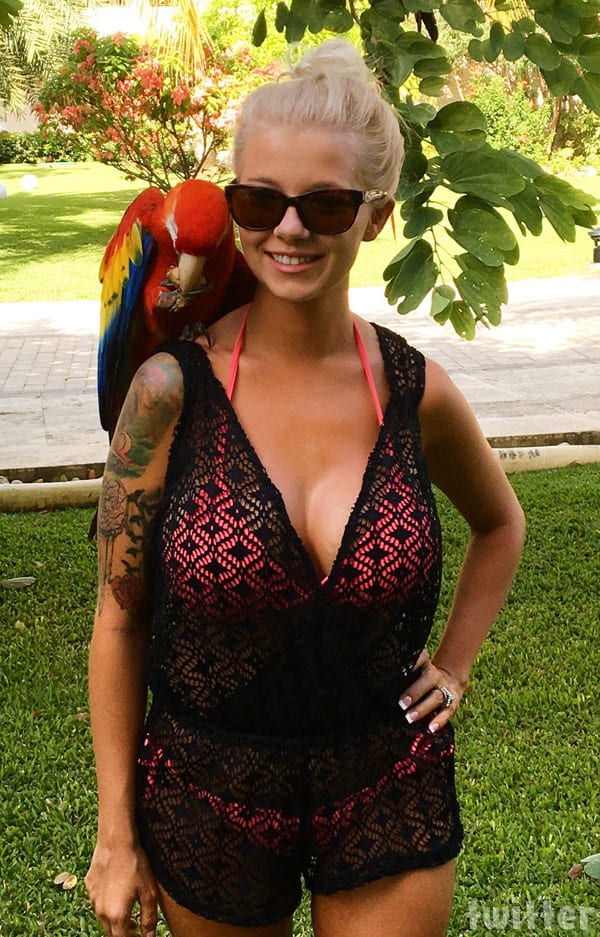 In addition to the candid shots on social media, Lindsey also recently posed for a staged bikini photo shoot at the beach in which she went topless — albeit with her fingers over her nipples. (I couldn’t find a site that has published the photos, which are licensed through Splash News, so I’m sorry I don’t have a link for you. Lindsey did do a previous non-topless bikini shoot that Perez Hilton covered though.) The staged topless beach photo shoot is a staple for clients of GR Media like Lindsey, and it’s something we predicted at the time of her Dr. Miami surgery (another GR Media specialty):

Lindsey follows in the breast implant footsteps of GR Media’s Teen Mom clients: Brianna DeJesus, Kailyn Lowry, and Mackenzie Douthit. If she continues following the GR Media Mad Libs formula, the next thing we can expect to see is a bikini photoshoot on the beach (once her breasts have healed) with the potential of topless shots if she is willing (like Briana was).

Please know there’s no judgement here! I think society gets a little too freaked out over female breasts anyways. And as far as the debate over elective breast augmentation surgery, I’ll let Lindsey defend herself via her Twitter account:

Girls.. Please don’t get a breast aug for just a spur of the moment decision or because you think you’ll get more attention.

I carefully considered getting my breasts done for many years and was just unhappy with the appearance after breastfeeding.

Just whatever you do make sure you are strictly doing it for just you and you only!

I had no idea my breast aug would become worldwide news.. It just did.

& please ladies don’t go to another country to get them done because it’s “cheaper” !!

Oh & also .. Saline is the Honda of implants silicone is the Cadillac . You get what you pay for ?

Lindsey also answered a very thoughtful question from an Instagram follower about whether or not she regretted having the breast augmentation:

COMMENTER: Just a question no mean to offend what so ever. But do you regret getting your boobs the biggest you could? I mean I think I’m just as petite as you are and I have some back pain here and there I would love bigger boobs just not sure how big personally I don’t think I could go that big because I feel like it’d put to much pressure on my back. How do they feel do you feel limited at all? @lilmamalinds you look amazing btw!!

LINDSEY: not at all, I was so tiny and had already had big boobs while breastfeeding before so it wasn’t that much of a change in about 3 sizes bigger than I was breastfeeding at a DD but I have no pain and they fit my body great. Most people are sh shocked when I tell them I’m a 32g So no I’m very happy with the results and size. 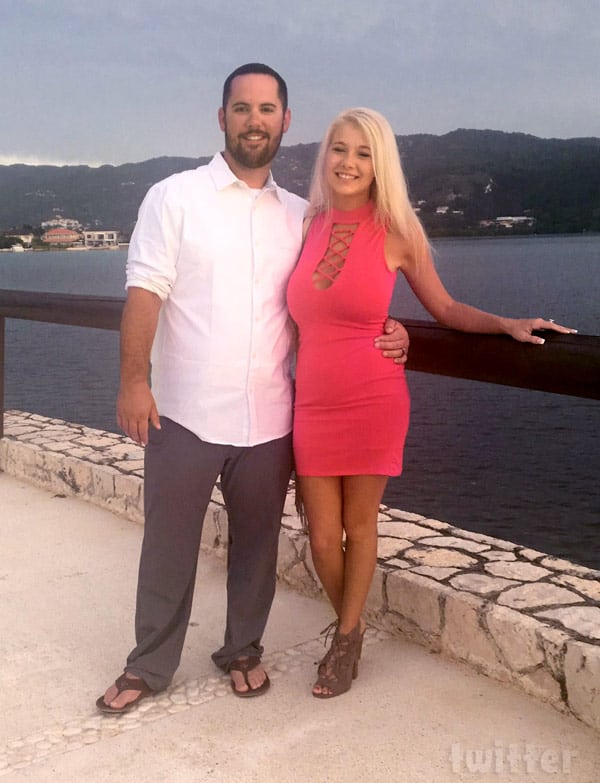 Back on Twitter, Lindsey expressed her appreciation for those who had positive responses, while admonishing the negativity: “I love seeing women lift each other up and support each other and to all the women who don’t y’all need Jesus! ??”

Speaking of lifting each other up and supporting each other, Lindsey seems to be struggling to find a bra that can do those things. “I need to find a website that sells cute 32g bras?” Lindsey asked her followers back in June. “Anyone know of any? Can’t find any in stores☹️” She soon after hinted that we might be seeing a line of Lindsey’s Secret big bosom bras soon. “I’m so close to just starting my own business making cute & sexy bras in large size cups but small band sizes,” she tweeted, adding the #overit hash tag.

In addition to Lindsey’s difficulties finding attractive foundation garments up to the hefty task, Lindsey also shared her minimal difficulties recovering from the Dr. Miami surgery. “How bad was the surgery?” One female follower asked. “Is it worse than child birth?”

“Childbirth is way more painful,” Lindsey responded, “this feels like when you breastfeed and your boobs are very engorged & super sore.” Lindsey was healed up enough to return to work on April 11, but a couple days later she did point out at least one lingering effect from the procedure: “Sneezing is hell for me right now ?.”

Moving on from her boobs to her personal life, things seem to be going EXTREMELY well for Lindsey, her husband TJ and their daughter Aniyah. TJ has officially adopted Aniyah as his own daughter, and on July 1, Lindsey posted a photo of her daughter’s social security card (with the number hidden, of course) which showed her last name had been officially changed to Nicholson! When asked about how hard the adoption process was, Lindsey said it was difficult — more so in her situation because Aniyah is a registered Native American:

the process was very stressful and pretty expensive . For us it was harder because Aniyah is a registered Native American so we had to go through many extra hoops to get the process done because of the Native American child welfare act. BUT I would do again in a heartbeat it was beyond worth it and now I never have to worry if something happens to me where will Aniyah go she’s always going to be safe with my husband & I. I really recommend it if the real father isn’t involved at all!

Lindsey expressed her gratitude and love for her husband TJ on his first Father’s Day after the adoption:

Happy Father’s Day to the man who didn’t have to be Aniyahs daddy but definitely chose to be ❤️ adoption finalized?? we are blessed ?‍?‍? 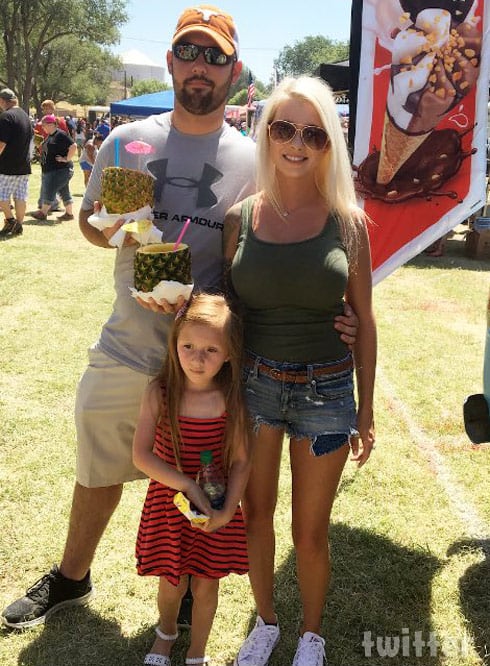 Becoming a dad might be something TJ will be doing again soon! “I don’t think my baby fever has ever been so high,” Lindsey tweeted back in April. “[I] can’t wait to have a little one, to see my husband hold our baby for the first time ?❤️” Right after that she tweeted: “When your biggest worry in life is deciding which month to get pregnant in.. #lifeisgood”

Congratulations to Lindsey, her husband, her daughter, and her “two girls!” They all seem to be doing fantastic!

PHOTOS The stars of Teen Mom from 16 & Pregnant to now