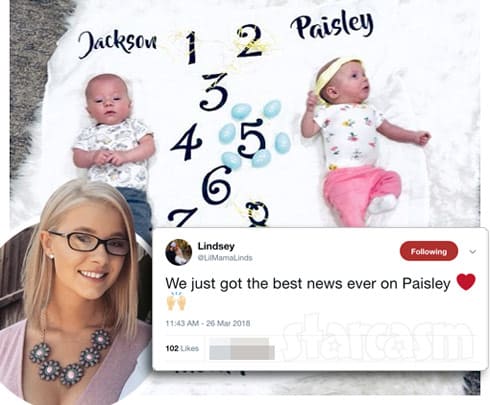 Sunday was exactly five months since former 16 and Pregnant star Lindsey Nicholson gave birth to her twins Jackson and Paisley — and after five months of multiple surgeries, inaccurate diagnoses, and trips to various hospitals in Texas, the Nicholson family finally got some GREAT news in regards to Paisley’s health.

Lindsey shared the update on Instagram moments ago along with a photo of Paisley and her brother Jackson. “Jackson & Paisley turned 5 months yesterday!” Lindsey began. “They are both doing so well. This morning we found out Paisleys genetic panel came back 100% normal. Meaning she doesn’t have anything wrong with her and she won’t have to live with a life long illness.”

There has been concern all along that Paisley’s liver issues were being caused by a disease or something genetic, but it turns out to have been something else entirely. “Her blood clot she had in her main portal did more damage than we all thought,” Lindsey explains. “It really prevented her liver from being able to grow properly since it wasn’t getting the proper blood supply.”

Lindsey could barely control her excitement: “We are over the moon ecstatic!” she exclaimed. “God is so goood y’all. It’s only up from here???☀” 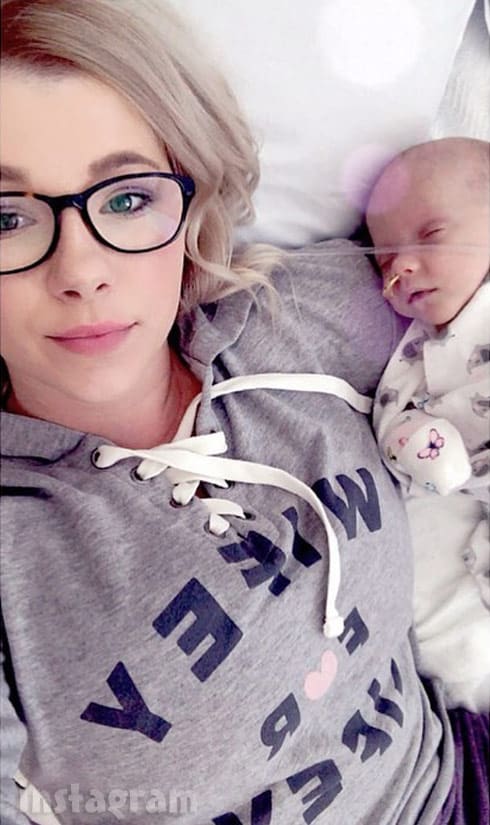 The FANTASTIC news comes after yet another difficult month for Paisley after she had to undergo emergency hernia surgery last week. I will share Lindsey’s updates since our last post in early March:

MARCH 9 – Paisley is out of surgery and doing well in recovery. Surgery went good, the surgeon was able to do the surgery laparoscopically. The anesthesiologist ended up having to use the ventilator on her and her oxygen level dropped pretty low after surgery ended. They found some mucus in her lungs, thankfully they were able to get some of it out and once they did that her oxygen levels went back up. Doctor wants too monitor her over night and hopefully we can go home tomorrow ???

We have been making the best out of our situation this week. We really wanted to take Aniyah on a vacation or at least out of town for a few days, but with Paisleys surgery and the 6 doctors appointments we had this week, it just wasn’t possible for us. One thing I did come to realize is, it’s not about where you go or what you do. All she wanted was quality time. It’s the little things that matter to kids the most. During those doctor appointments we’ve found out some pretty upsetting news (once again) Paisley has to have ANOTHER surgery next week. They tried to correct her umbilical hernia last Friday and by Sunday it was back. They also discovered a very large hernia on her private area . I’m so glad they found it and she will get it fixed, but my heart just hurts for Paisley. When is it going to end? It’s always something new with her . My poor sweet p has gone through more in 4 months medically then most people go through in a lifetime . No baby deserves this. I just wonder why.. why her? I know that’s a bad outlook on it all, but does it ever end? I don’t want her entire life to be revolved around hospitals and doctors. I just want her too have a happy and healthy life. She’s the strongest little lady I’ll ever know???

MARCH 20 – Today was supposed to be just a check up on Paisleys Gtube & to schedule her surgery to fix her hernias. We had them scheduled for April 16th so she’d be old enough to not have to stay over night at the hospital. After the surgeon felt the hernias he discovered Paisleys right ovary is incarcerated and is doing emergency surgery today. Please pray he can fix her right ovary and that it’s not completely strangulated.

MARCH 20 – Paisley is out of surgery. Surgeon said it went smooth, he was able to repair both hernias and save her ovary ???