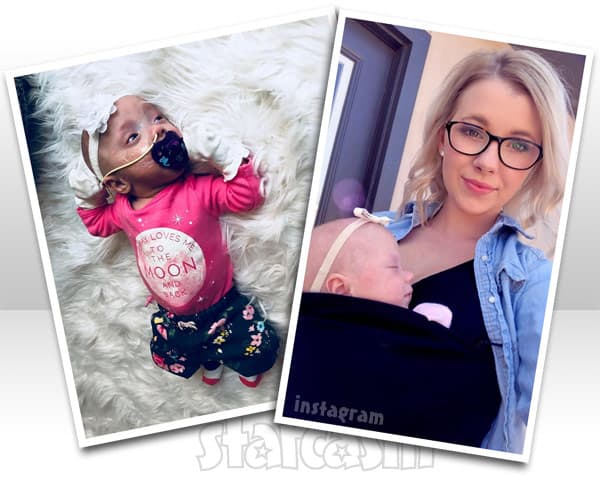 16 and Pregnant star Lindsey Nicholson‘s twin daughter Paisley continues being a little warrior. Doctors are still trying to figure out the cause of the liver problems that have plagued the five-month-old’s since her premature birth in late October. In the latest update, warrior mom Lindsey shares some good and bad news from the latest round of tests as Paisley preps for surgery on Friday.

Lindsey shared the photo of Paisley included above and began by pointing out that the timing of her post was very appropriate. “In honor of International Women’s Day, of course I had to post a picture of the strongest little woman I’ll ever know,” Lindsey began. She then jumped right in with yet another in-depth update with everything they learned this week:

Yesterday we got back [Paisley’s] liver biopsy report. It showed she has what you’d call paucity of the bile ducts. Meaning she doesn’t have enough. She has about less than half of what she should have. What does that mean? Well, it can mean she has a genetic disorder or it could be because she had a blood clot that was clogging the flow of blood into her liver causing it to not be able to develop fast enough. 50% of people with this can go on to form severe liver disease and need a transplant or it just gets better. We still need her genetic test back. That will be the real tell tell.

We got her liver levels checked this week, for the first time almost all of them are at a normal level. Some are still high but trending way down! Her AFP? Is almost normal!!!

They really want the sweat chloride test done next week. So we will do that to check for cystic fibrosis. I don’t think she has that l, I truly think she’s fine.

She’s gaining weight but has slowed down a lot again. Hopefully that starts to pick back up. Shes doing so much better. Tomorrow she’s going in for surgery to get a G Tube placed in her stomach so she won’t have the NG tube in her nose anymore. Which will be great because this little one is STRONG! She rips out her tube all the time. It’s just really stressful for her. So we are excited to make her more comfortable. If y’all could say a quick prayer for her that she does well under anesthesia tomorrow ????

Lindsey’s latest update comes after what was a very frustrating week for the Nicholson family, as they dealt with delays and a lack of communication. On Monday, Lindsey tweeted that the family was excited to finally be getting the results of Paisley’s liver biopsy, but that didn’t happen.

Fast forward two days and Lindsey was getting very frustrated. “Don’t tell me you’ll call with my daughters results on Monday afternoon and it’s now Wednesday and I’ve heard NOTHING,” she tweeted, adding “WTH” and and angry ? emoji.

Later that day Lindsey tweeted “Paisleys doctor finally returned my calls??” and revealed that she [Lindsey] would provide an update the following day.

The last time we checked in on Paisley, she and the Nicholsons were in Dallas for tests. They were able to return home just after Valentine’s Day, and mom Lindsey shared this update and V-Day photo of Paisley: 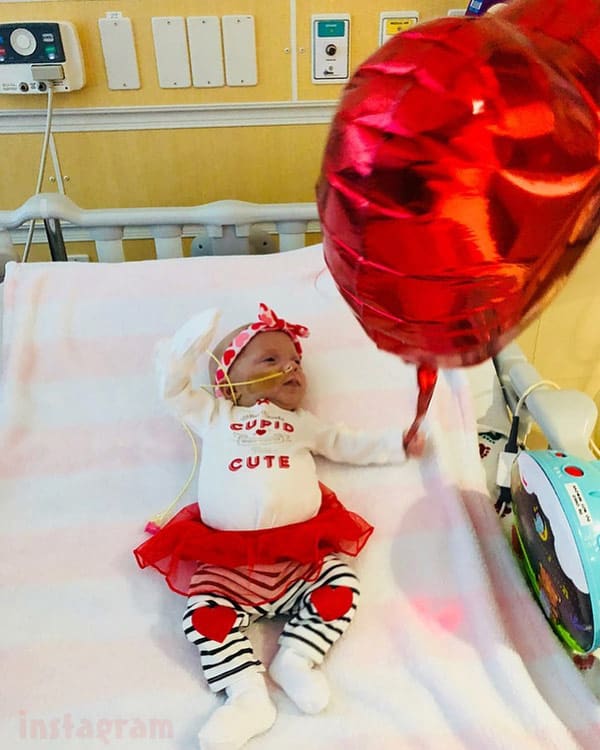 Sweet P & I are back home? they ran just about every test in the books while we were in Dallas. They all could take between 1-6 weeks to come back with results. That being said they taught me how to use the feeding tube and we will head back once we get results . Doctors have a pretty good inclination of what she may have. Until we get the results we won’t even put those words out into the universe. As for now, we are cherishing every single moment at home as a family of 6. #prayforpaisley. |???????????|

On February 26, Lindsey celebrated the twins’ 4-month birthday with an update on both Paisley and her brother Jackson:

| 4 Months | Jackson & Paisley turned 4 months yesterday! (2 months adjusted) Today they both had their 4 month doctors appointment. Jackson is doing phenomenal in weight, growth & developmentally. He’s right on track like a normal 4 month old baby! For some reason in this picture they look close to the same size but he’s actually way longer, and weighs a lot more lol. Paisley- is gaining good weight now. She’s averaging 30 grams a day since putting the NG tube in. Which is right on track. She still has a long ways to go as she’s only 8.5 lbs. Paisley is more on the 2 months old scale verses her actual birth day. Which is totally normal in preemies. Since the NICU was technically just used as an artificial womb. We were told to expect her to be on the NG tube until she’s at least 9 months old. Besides her liver and weight issue, she’s doing fantastic! Every doctor is amazed at how physically strong, alert, & happy she is especially with her health history. We still haven’t got the liver biopsy results and we are also waiting on her genetic testing results. Hopefully we will have those soon!

* In the top photo, Lindsey is wearing a Soothe shirt by Lalabu.