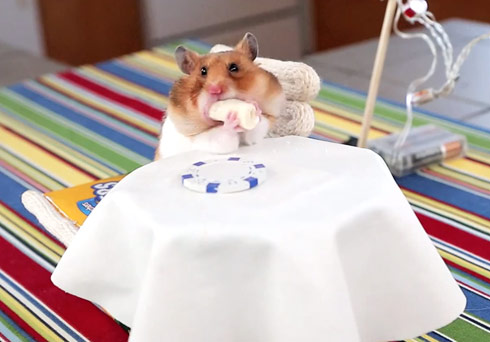 My friend dialed me up this morning and was all like, “Whatcha been up to man?” And I had to answer honestly, “I’ve been watching this random video of a cute hamster eating a tiny burrito over and over again and I can’t stop.”

This friend hung up on me but did call back later and stated, “Now I’m simply unable to stop watching the video you mentioned. It is dangerous.” Well, that’s all I needed to know to verify that this was worth sharing with all of you fine folks, or at least the ones that haven’t already watched it like a million times.

This delicious little clip dropped on YouTube just 2 days ago and it already has nearly 3 million views, of which I’m responsible for at least a fifth…

It’s hard for me to decide which is more eloquent and addicting; the concise way in which our little guy pounds his burritos or the cuteness behind the actual miniature-sized delicious treats.

All I can say is, “Thank you internet and thank you HelloDenizen for making this awesomeness.”

Does the Rolling Stone cover of Boston Bomber Jahar Tsarnaev cross the line?