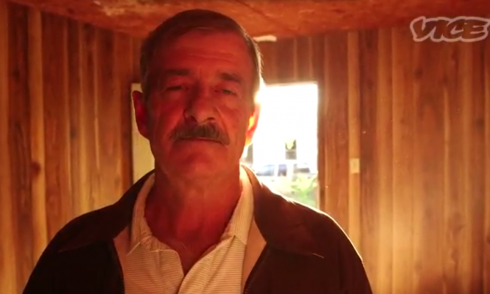 While AMC’s explosively popular series Breaking Bad was in it’s peak, a man named Walter White was running a meth empire in Alabama. He wasn’t just any meth cook, either, he’s described as a “meth chef” in a new VICE documentary, just like Breaking Bad’s Walter White.

In the VICE doc Walter travels back to the trailer where he used to live, and the shed out back where the meth was cooked. “I worked every day and was a family man. It was a good time in my life. It was beautiful. We started making meth part time at first but then demand got so high i would work during the day and make meth at night,” Walter says. “I was making money in construction but the meth money was outweighing it by so much I decided to go down that line.”

Soon he was taking in thousands a day, and spending just as much. “When you make it like that, it’s easy to spend, it’s just a different lifestyle. Looking back now, it’s hard to believe that I could go through that much money in one day. Several thousand, easy.” But things started to fall apart very quickly. His wife left him and his relationship with his kids deteriorated. His son says it got to the point where he would see his father in public and they wouldn’t speak to each other. “It just wasn’t dad anymore,” he says. “It just wasn’t the same guy.”

Walter’s lawyer told him to stop cooking in 2008 because he was being watched, which he did for a while. In the meantime his partner Sammy continued to cook, and was arrested and sentenced to two life sentences. When Walter reserved making meth that same year, he was arrested. In 2012, he was arrested again while still on probation from the first arrest, and was put on the Most Wanted list of Tuscaloosa County for failing to appear in court.

White is currently facing life in prison for his crimes. While awaiting his March 2014 trial, a judge lowered his bond and sent him to Foundry Rescue Mission & Recovery, a faith-based treatment program in Bessemer, Alabama. “If i have to go to prison, I won’t be hurting anybody but myself this time,” he says. “It’s just me answering up to the things I’ve done. My family, they’ve got jobs and lives, I won’t be hurting them this time.”

Infant survives after being trapped for days beneath deceased dad