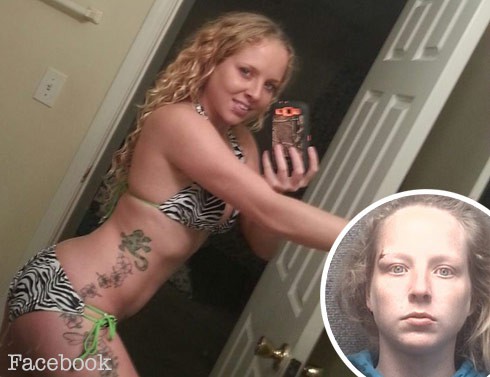 Carolynn Wright, a 23-year-old South Carolina woman who last year was convicted of striking a fellow strip club employee over the head with a stiletto shoe, was arrested yesterday after she bit off a “portion” of a finger belonging to a Walmart employee. According to police, the employee had been attempting to stop her from shoplifting lubricant, panties, and condoms.

Via a report obtained by The Smoking Gun, Wright was confronted by a pair of loss prevention specialists as she was trying to leave a Walmart in Myrtle Beach, South Carolina. She fought with the two female staffers, punching one in the head. During the fracas, Wright bit down on one of the worker’s fingers, “causing a portion of the finger to be bitten off.”

A female customer, who was trying to dial 911, had her phone taken by Wright after it was dropped. When Wright refused to return the phone, and instead pulled her hair, the customer punched Wright in the face.

When the cops arrived they noticed the “piece of a finger” belonging to the employee. The staffer who lost it was attended to by arriving EMS workers, but the police report indicates that it “was not able to be reattached.”

Wright was eventually arrested after the police removed her from a minivan in the parking lot. She has been charged with aggravated assault, a felony, simple assault, and larceny. She is being held without bond in advance of a court hearing next week.