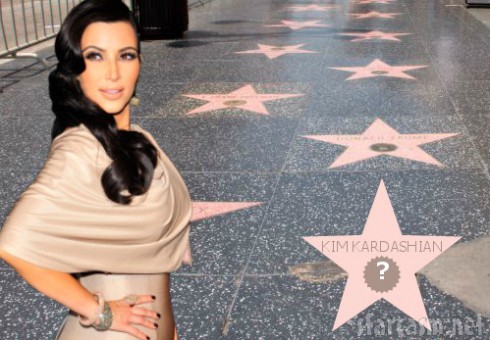 During his appearance on Jimmy Kimmel last night, Kanye West lamented the fact Kim Kardashian is ineligible for a star on the Hollywood Walk of Fame.

Kanye’s rant was likely inspired by a Hollywood Walk of Fame spokeswoman’s dismissal of Kim’s goals — more than one year ago. The war of words began in August 2012 when Kim told V Magazine she hopes to earn a star.

“I think there was a quote where somebody said that reality stars will never get a star on the Hollywood Walk of Fame. So, of course I’m so competitive that I think that it would be a huge achievement and a goal that anyone would want. I would love to break that mold,” Kim said.

In response, a representative from the Hollywood Chamber of Commerce said it’s not just a matter of “if you believe, you can achieve.”

“She is a reality star. We don’t do reality stars. She needs to get a real acting job then come to us,” the representative told Hollyscoop.

In fact, earning a star requires even more than a resume filled with top acting honors. Based on the Hollywood Walk of Fame nomination form, celebrities hoping for immortalization at the tourist stop have quite a few hoops to jump through… 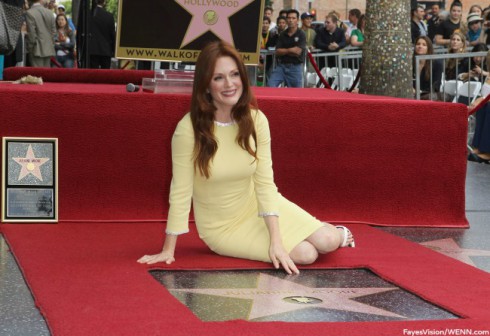 ^ Four-time Academy Award-nominee Julianne Moore is the most recent celebrity to be honored with a star on the Hollywood Walk of Fame.

The first step in the process is submitting an official application and guaranteeing to fundraise $30,000 if selected. In the paperwork, the entertainer must detail professional qualifications in the areas of motion pictures, television, radio, recording or live theater. He must also prove civic and/or community involvement.

Finally, each celebrity must check a box in the application saying, “If selected, I will participate in person at the Walk of Fame star dedication ceremony.”

That last bit about being willing to throw a big media event shouldn’t be a big deal for Kim. But, she’s really got to get working on the acting: The Walk of Fame committee requires at least five years of entertainment experience before a nomination will be considered.

Do you think Kim Kardashian should get a star on the Hollywood Walk of Fame?