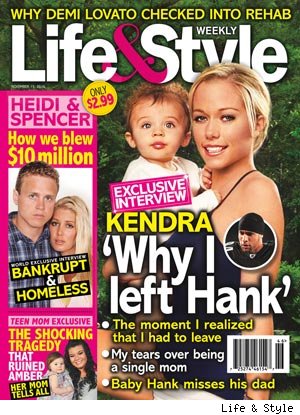 It’s not a typical move for a newlywed wife and her newborn son, but Kendra Wilkinson Baskett just moved away from her husband Hank Baskett to live in L.A.

Hank is currently residing in Minnesota and playing for the Vikings, while Kendra is hanging in Hollywood . . . to further her own career? There are no rumors of divorce in this split, it just seems like a circumstantial arrangement, but that doesn’t mean that Kendra still doesn’t feel like a “single mom.”

She recently told Life & Style “Not having Hank around hurts,” Kendra says. “Moving across the country by myself makes me think of my own mom who raised me and my brother alone. Hank’s not going to be there forever, but with him not physically here, I’m a single parent now.”

Even though she’s devastatingly lonely, she says she decided on the room because she’s “at home on the West Coast.”

“I fit in well in Philly, and I could relate to all the people, but the West Coast is my home. This is where all my family and friends are. When Hank left I felt lonely. He’s my everything. Nobody else can really fill that loneliness.”

UPDATE: September 2011, While promoting the new season of her E! reality show, Kendra’s been speaking with tabloids about how her postpartum depression made her almost divorce Hank. She told InTouch hey fought quite a bit (at one point Hank had a panic attack and passed out) and slept in separate bedrooms, but now Kendra professes to be doing better and vows to “life her life happy.”

Is Tila Tequila Allergic to Alcohol?

VIDEO Both Hailey Glassman interviews on The Insider