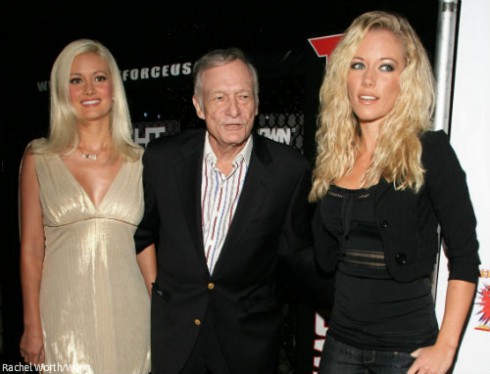 As expected, Kendra Wilkinson is siding with Hugh Hefner in what is quickly becoming quite the war of words with former Girls Next Door co-star Holly Madison.

In excerpts released earlier this month from her memoir, Down the Rabbit Hole, Holly accused Kendra of being “the fakest person” and claimed Hef is a cold manipulator. The Playboy founder responded this week by saying he believes Holly is attempting “to rewrite history in an attempt to stay in the spotlight.” Now, unsurprisingly, Kendra is taking Hef’s side.

“My perception was that she acted like a First Lady,” Kendra told People of Holly. “You know, she had to play a part, play a role every day being there. Like, ‘I have to be this in order to get this.'”

As for what she was aiming to get, Kendra said Holly’s motives were “clear as day.”

“Holly, you can tell, had this ulterior movie every minute being in the Mansion,” Kendra said. “She wanted Hef’s kids, she wanted a piece of Playboy and she wanted to marry Hef for, obviously, his will. That didn’t happen. So what do you think’s going to happen? Revenge. So we’re witnessing some revenge here.”

Unlike Holly, Kendra said she was just in the Playboy Mansion “to have a good time” and still thinks highly of Hef.

“I feel bad for Hef,” she said. “But you know what? He’s an amazing human being.”

Down the Rabbit Hole was released yesterday.