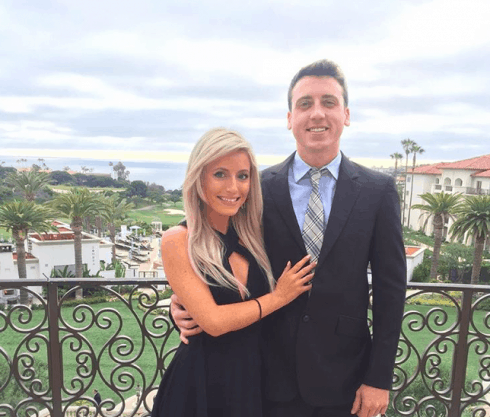 RHOC OG Vicki Gunvalson feels a bit lonely without her daughter Briana Culberson and her family living in the same state, but son Michael Wolfsmith isn’t far away at all! In fact, Vicki gets to spend all day working with Michael at her Coto Insurance firm. During a recent episode we see Vicki hounding Michael to spend more time with her, and she even invites herself on a European vacation he’s planning with his girlfriend. Just a few weeks ago Vicki, her boyfriend Steve Lodge, Michael and his girlfriend Dani Golden did take a luxurious trip to Greece together, but it’s unclear if this is the trip mentioned in the show.

Happiest of birthdays to this beautiful lady! ??

Michael and Dani are reportedly serious and living tougher, but aren’t engaged (much to Vicki’s chagrin.) During a recently aired episode Vicki puts on the heat for Michael to propose to Dani, but he responds that he doesn’t know if they even believe in marriage. Vicki’s snaps back that “every girl wants to get married – I want to get married.”

It seems like Vicki may be projecting her own marriage desires onto Michael and his partner – Vicki’s quest to get married to her boyfriend Steve Lodge is a major plot point this season. Even her friend Tamra Judge joins in to put the pressure on Steve.

Engagement drama aside, this summer’s trip to Greece was a bit of a birthday getaway for both Dani and Steve, and the Instagram pictures are simply breathtaking. The Aegean Sea is a special shade of blue.

Today was an amazing birthday! ? We sailed the Mediterranean on a private yacht and had a 5 course Greek meal cooked for us. (Thank you: @vickigunvalson ). Now off to our next destination! ?

Who is VH1’s ‘You’re Cut Off’ life coach Laura Baron?