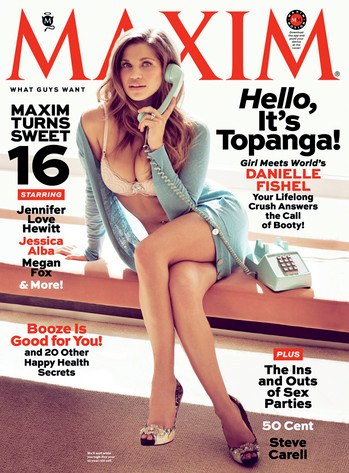 Everyone who grew up crushing on Danielle Fishel’s Boy Meets World character Topanga are getting to continue their fantasies into adulthood. Danielle, who will reprise her role as Topanga in the new Girl Meets World spinoff, is featured on the April 2013 issue of Maxim looking better than ever!

When asked why people are responding so strongly to the new spin-off, she conjured up memories of TGIF. “We were in people’s family rooms every Friday for seven years. ABC’s TGIF lineup was probably the one time a week when parents and kids all watched TV together.” I know as a kid TGIF was may favorite way to wind down from the week. Why isn’t programing in that time slot a thing anymore?

Apparently Danielle and her co-star Ben Savage almost dated in real life! She told Tyra Banks a few years ago that they went on a date once, but clarified in Maxim that they felt too much like family to have any real sparks fly, “We went on one date, when I was about 15, and by the time the dinner was over we realized mutually that we were more like family than lovers.”

She also recalled an interesting anecdote about the time when she was on a private jet with other young ABC stars when Bob Saget asked them for coke.

“One time we were all on a private jet going to Disney World, and my mom, dad, and brother were also with me… We were trying to take a nap, and all of a sudden Bob Saget walks down the aisle, rips open our curtain, and shouts, ‘Do you guys have any coke?!’

Then he looks my dad in the eye, laughs, and closes the curtain. My mom was like, ‘What was that all about?’”