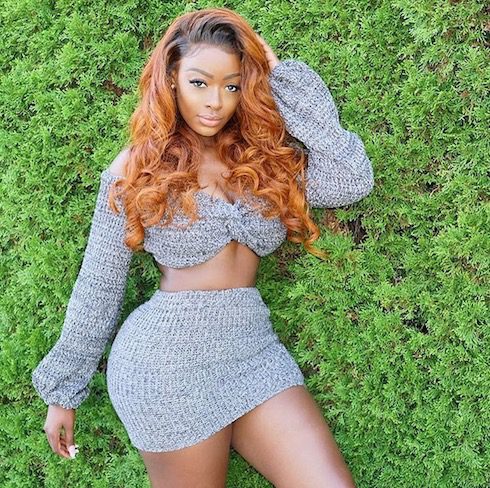 Love & Hip Hop New York newbie Maggie Carrie is no stranger to the spotlight’s glare. A model best known for her work on MTV’s Wild ‘N Out, Maggie rose to national prominence when she was shot backstage before a TI gig in 2016. But who is Maggie Carrie now? She’s prepping her jump to the music industry, with a little help from her boyfriend, fellow LHHNY Season 9 newbie Maino — himself a veteran of the game — and from VH1’s cameras.

Who is Maggie Carrie?

Maggie Carrie’s full name is Maggie Carrie Heckstall; she’s gone by the former as a stage name for the past couple of years. She was born in May of 1990, so Maggie Carrie’s age is 28. She had something of a difficult upbringing: Maggie lost her mother at the age of nine. And, for most of her life, Maggie has been one of the primary caregivers for her younger brother, who suffers from diabetes and is confined to a wheelchair.

Maggie’s made her name as a model and hair empresario thanks to numerous TV and fashion appearances, and owns and operates Hair Like Maggie. The company “was created to give women good quality virgin hair that’s so affordable they can’t find it anywhere else,” and sources “donor hair from all over the world and specialize in Brazilian, Malaysian, Cambodian, Peruvian, and Indian Raw hair textures.”

How did Maggie Carrie get shot?

On May 25th, 2016, Maggie was celebrating her birthday week at a TI concert at New York’s Irving Plaza. Daryl Campbell, who raps under the name Taxstone, brought a gun to the show and opened fire on Troy Ave, with whom he had a beef. Troy’s bodyguard and friend Ronald McPhatter was killed in the shooting, and three people, among them Maggie, were injured by gunfire. (Taxstone was charged with murder in July of 2017.)

Thanks to Irving Plaza’s security cameras and the New York Police Department’s search for the shooters, footage of the carnage quickly went public:

Maggie was shot in her left leg, just above the knee. Though she’s since made a full recovery, the trauma from the shooting lingers: the bullet is still in Maggie’s leg. (It can’t be removed without causing nerve damage.) The mental trauma had her in therapy following the shooting. And, according to the New York Post, the investigation into the shooting was so invasive that Maggie declared her intention to sue the NYPD.

“Anytime anyone would walk to my [hospital] door, they had six officers out here, staring into my room,” she told the paper. “I cooperated with the officers. I don’t know if they wanted me to tell them more, but I don’t know what happened….These people are heartless. The interrogation started in the ambulance. The detective was in the trauma unit the whole time, while they’re cutting my clothes off and everything.”

The shooting also got Maggie thinking about gun control in ways she never had before. She told the International Business Times that she was hopeful for some sort of change, even if the inevitability of gun violence was too much to overcome.

“I know we can get some of them off the street,” Maggie said, in the aftermath of the shooting. “If we can wipe the streets clean than all Hail Mary, but I don’t think that’s going to happen. I’m not the type of person that will be like, ‘We need to get these guns off the street’ because I feel like it’s always going to happen, no matter what.”

Maggie appeared in an episode of MTV’s True Life just five months after she was shot. Her True Life: I’ve Been Shot episode is still available online; you can stream it in its entirety here, via MTV.

Though Maggie’s modeling shots often favor her right side (or edit the injury out altogether), her scar is sometimes still visible. Maggie seems to display it not as a badge of honor, but as a simple declaration of fact: This is my bullet wound, and it’s not my job to explain it to you.

You can just make out Maggie Carrie’s scar above her left knee in the photo below: 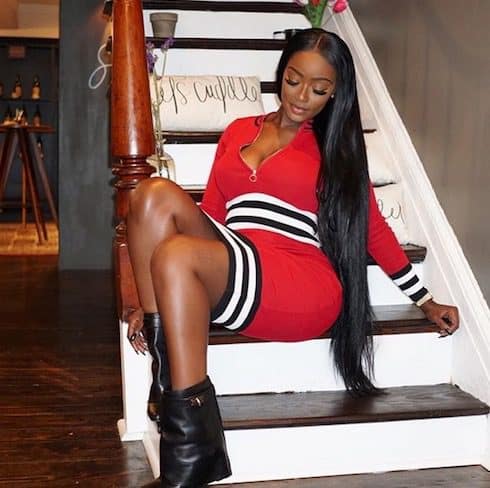 It’s also visible — if imperceptible — in this bikini shot taken in early 2017: 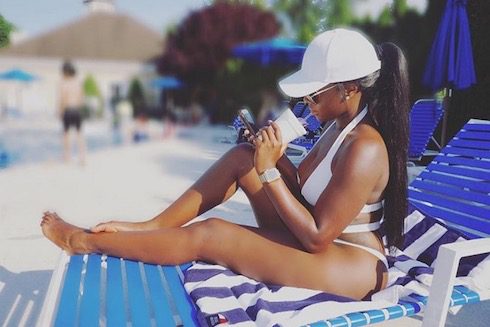 For good measure, here’s a throwback pic of Maggie rocking another bikini in one of the first photos she shared on social media. The selfie dates to the summer of 2014: 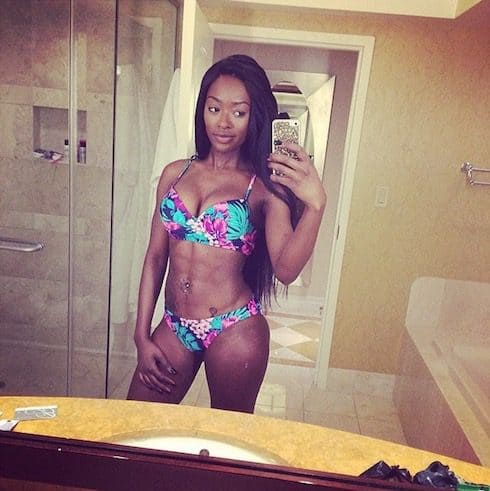 Finally, here’s a sweet pic of Maggie and her brother Julius, taken just a few *weeks* after the shooting. It sounds like her brother had fallen into a funk following the shooting, and didn’t want to go through with his annual birthday party — so Maggie rose from her hospital bed to cheer him up:

I could not just stay in bed and watch my brothers birthday go by with out a celebration. He was sooo excited about his annual birthday cookout before my incident. Then after the madness he told me he didn't want a cookout anymore and had been so down. I had to get up, crutch around, even borrow his wheelchair to go out and make this happen. ( & it was a surprise). I love you big brother so much. You are the light of my life. I love taking care of you even though I can't do much right now. We're going to have a blast tonight.

Maggie Carrie’s music career is poised to take off

Though she’s best-known as a model (for now), Maggie has actually been recording music for almost as long as she’s been posing for cameras. Her most popular track is probably still her shemix of Kirko Bangz’ “Drank In My Cup,” which has well over one million views on YouTube:

Maggie also had a minor hit with “Dirty Girl,” the last single she released before the shooting disrupted her career. As Maggie explained to All Hip Hop in the aftermath of the shooting, she literally couldn’t stand in the recording booth for months after being shot in the leg.

“It takes a lot of hours in the booth,” Maggie said. “I can’t stand for those hours…I can’t do much of what I was doing before the incident.”