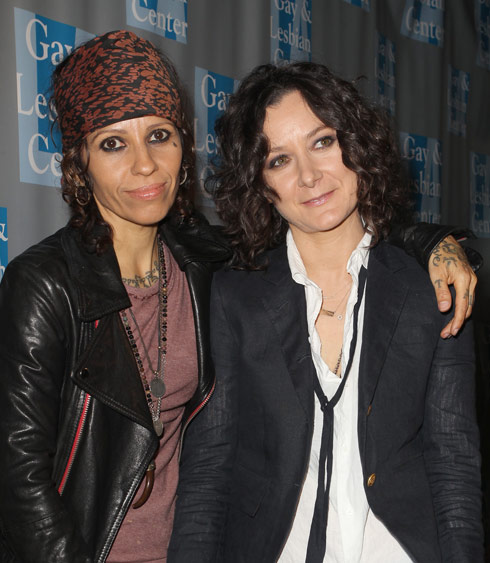 The Talk’s Sara Gilbert revealed on the show yesterday that she has become engaged to former 4 Non Blondes singer Linda Perry. I said hey, that’s what’s going on!

According to Gilbert the proposal from Linda was extremely romantic:

“We go to a park, we have food and we’re eating it, it’s really sweet and there’s this guy sitting playing guitar, like a street musician. He starts playing this song that we love… I’m like, ‘Oh, that’s so weird, this is so magical and amazing.’ Suddenly the people picnicking next to us pull out string instruments from under the blanket and walk over and they start playing “Lovesong” (by The Cure).”

Perry, a successful songwriter who’s worked with artists such as Pink, Gwen Stefani and Christina Aguilera, then revealed 4 separate t-shirts that each had one word printed on them – Will. You. Marry. Me.

As if all that wasn’t enough, Perry then whipped out the engagement ring and finished it all off by having John Waite walk up and play his hit, “Missing You.” I said hey, that’s what’s going on with an amazing proposal!

I know for some of our reading demographic all of the songs listed above might be a little before your time. For a little edification, here’s Linda’s smash hit tune “What’s Up?”

And The Cure’s “Lovesong.”

And John Waite’s “Missing You.”

Ahhhhhh. The memories… Congrats to Sara and Linda!