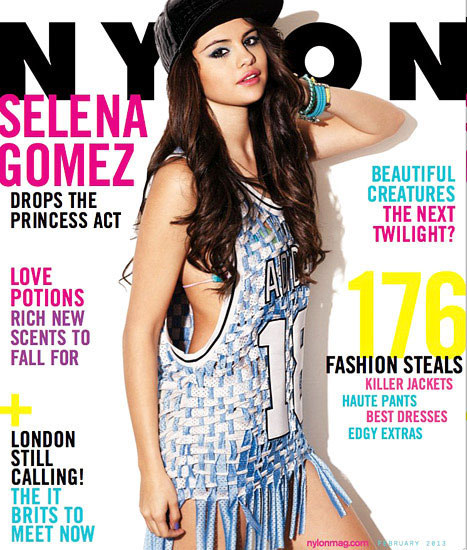 Selena Gomez wore a shredded jersey dress thing on the cover of Nylon’s February issue to promote her new movie Spring Breakers. She also opened up about love, and how Taylor Swift helps her deal with her issues.

This was Selena’s first interview since her on-again-off-again relationship with Justin Bieber ended for real, and she doesn’t seem too distraught.

“I’m having fun. At the end of the day, love is such a normal thing, and everyone deals with it. Just because it’s a different lifestyle doesn’t change the meaning of what I’ve been raised on, which is fairy tales.”

Interesting that Selena mentions fair ytales, because she also talks about how she discusses a lot about her issues with love and family with Taylor Swift, who builds a lot of fairy tales herself in her songs.

“We both experienced the same things at the same time. But we’ve never once talked about our industry. She just became the person I’d go to for an issue with my family or boyfriend. It’s so hard to trust girls, so I’m lucky to have her.”