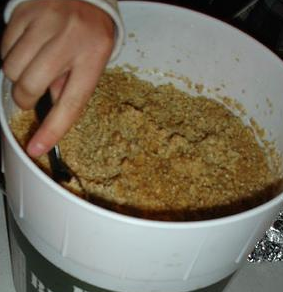 On Big Brother every week the contestants compete in groups to determine who will be the Haves of the week and who will be the wretched Have-Nots. The Have get to dine from a well stocked pantry containing junk food, soda, fresh vegetables, and many other delectable foods.

The Have-Nots get to eat some oatmeal-like concoction called “slop,” as well as a couple of other foods America votes on. This week the extra foods are bean dip and broccoli, which isn’t that bad depending on your tastes.

What is slop? Ragan had to live off it for 24 days straight; does it contain enough nutrition to sustain someone for that long?

Slop is officially defined by CBS as a ” just-add-water, nutritionally fortified porridge mix.”

Yummy! The producer, Allison Grodner, who came up with this slop idea says she ate it for a meal one time describes it as “It’s really bland, but because it’s got protein it’s got a bit of an aluminum taste.”

To cover up that aluminum taste they can add some approved condiments:

Here’s another description courtesy of Kyle from Season 10: “It tastes like warm oatmeal mixed with clay.”

“the worst thing about slop is that it gets more disgusting with every bite. You almost think you can stomach it at first, but the fact that it tastes like wet concrete mixed with Play-Doh makes it impossible to bear. The color is equally unappetizing; it looks like a cross between the greenish slime from Nickelodeon’s You Can’t Do That On Television and guacamole.”