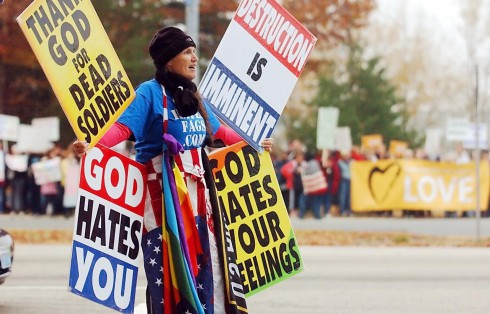 Westboro Baptist Church, a small church famous for protesting outside funerals for U.S. soldiers, has announced that it will protest Sandy Hook Elementary to “sing praise to God for the glory of his work in executing his judgment.” Another member of the church has tweeted that “God sent the shooter.” They’ve actually made that statement into a sign posted on their website, which we refuse to link to. Westboro believes that America is being punished by God for accepting gay and lesbians, and thinks 9/11, war, and any tragedy involving death is an act of God’s vengeance on our country.

The vigil has since been cancelled because of a bomb threat, but there is still a chance they will show up at the funerals of the shooting victims.

A hacker activist group KY Anonymous hacked into their website today, posting the video and statement below below:

There is a petition to “Legally recognize Westboro Baptist Church as a hate group” on the White House website.