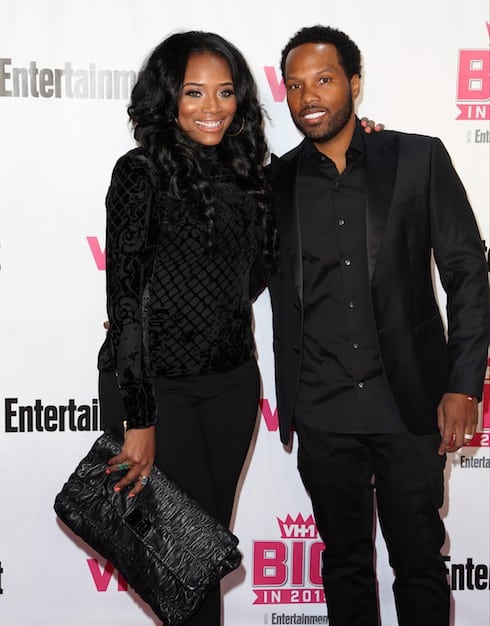 Mendeecees and Yandy might have one of the strongest connections on Love & Hip Hop New York, but they also might not be a legitimate married couple. According to a brand-new report tied directly into Yandy’s plot for LHHNY Season 7, she and Mendeecees might have falsified their entire marriage by deliberately leaving one signature off of their marriage certificate.

The Season 7 premiere already laid the foundation for Mendeecees and Yandy’s primary storyline this year: the reemergence of his baby mamas Samantha Wallace and Erika, who’ve decided to team up and bring Yandy down in the most embarrassing way possible. To that end, it seems that one part of their plan is to come after Yandy for child support they can’t get from Mendeecees thanks to his prison term.

However, a hot tip from noted gossip blog Fameolous reveals that Mendeecees and Yandy may have already anticipated such a move–and, in blocking it, could have nullified their whole marriage. The Fameolous report claims that Yandy left her signature off of the marriage licence when she and Mendeecees were wed back in May of 2015. This report does fit Mendeecees and Yandy’s timeline, as at the time of the live wedding Mendeecees was already under investigation for the drug trafficking charges that would see him sentences to eight years behind bars later in the year.

Yandy has yet to respond publicly to the allegations, which in turn has led fans to believe that the marriage license drama will pop up later this season. However, that isn’t the only bit of tea about Mendeecees and Yandy of late. There’s another anonymous source doing the spilling, and, while none of this can be verified, if you’ve got young children nearby you might want to shield their eyes:

What's going on today???? OK FAM IF YOU WANT THE REAL ON YANDY. LOOK UP QUEENOFHARLEM ON IG. HER NAME IS MICHELLE SMALLS FROM HARLEM POST HER PIC & SAY I JUST GOT A TIP THAT YANDY WAS A SIDE PIECE TO NOT ONLY ERIKA BUT TO MICHELLE TOO. WATCH HOW YOUR TIMELINE BLOWS UP. SEE MANDEECEE WAS A LIAR FROM THE RIP. THE GIRL QUEEN OF HARLEM WAS DATING MENDEECEE FOR YEARS HE EVEN BROUGHT HER A RING HE ASK HER TO MARRY HIM ALSO. SEE MENDEECEE HAD MONEY FOPR HE WAS SOFT ON THE STREETS OF HARLEM, PLUS HE AS A LITTLE DICK ALL THE GIRLS KNOW HE AS A LOOK DICK. HE LOVE GETTING HEAD CUZ HES SHAME OF HIS LITTLE ASS DICK. FAME IF YOU WANT TO KEEP IT REAL POST THE TIPS THATS COMING IN DONT BE SCARED. THE CHICK MICHELLE RAISE LIL MENDEECEE ALSO ALL OF THEM LIVE IN HER TOWN HOME THAT MENDEECEE PUT THE MONEY UP 30K. NOW THE CHICK MICHELLE IS THE MOTHER OF DIAMOND WHO MENDEECEE WENT TO COURT FOR, YES HE GOT HEAD FROM THAT LITTLE GIRL & HE FUCK. MENDEECEE PLAYED ON YANDY CUZ HE KNEW SHE WAS SUPER OPEN OFF HIM, HE WAS YOUNG CUTE NIGGA GETTING MONEY BUT HE HAD BITCHES ALL OVER THE WORLD. HE KNEW YANDY HAS A WAY FOR HIM TO CLEAN HIS MONEY, MENDEECEE LAWYER TOLD HIM NOT TO GET ON THAT SHOW, BUT HE WANTED THE FAME & THE BITCHES THAT CAME WITH IT. WHEN HE GOT OUT HE WAS STILL CHEATING ON YANDY. HIS TRUE LOVE IS ERIKA, SHE WAS A VIRGIN WHEN HE KNOCK HER DOWN SHE WAS ONLY 14 OR 15 WHEN HE GOT THE PUSSY. ERIKA USE TO LIVE WITH MENDEECEE WHEN HE HAD A DOWNLOW CRIB IN NJ AND THE SAME TIME HE WAS WITH MICHELLE AND YANDY.. YANDY IS BIRD ON THE LOW BUT SHE FRONT LIKE SHES MS GOOD GIRL THE HOOD KNOW SHE WAS A JUMP & SHE FUCK JIM THATS WHY CHRISSY DIDNT FUCK WITH HER. YANDY AS A CREW CALLED THE 80S BABIES AND ALL OF THEM WAS # 2 OR 3 IN SOMEONE RELATIONSHIP. THEY ALL SINGLE PARENTS. LISTEN ITS A LOT OH YEAH MONA SCOTT OFFER ERIKA MORE MONEY THEN YANDY TO TELL HER SIDE OF THE STORY & ERIKA SAID NO & HER FAMILY WAS LIKE DONT GET ON THAT SHOW. THAT WAS BACK THEN, NOW SHES GETTING ON THERE CUZ YANDY GOT THE WORLD THINKING SHES THIS CARREER WOMAN BUT SHES A JUMP. ITS ALOT PUT GET THAT PIC FROM QUEEN OF HARLEM & SAY IN THE CAPTION WORD ON THE HARLEM & NY STREETS SHE WAS WITH MENDEECEE ALSO

In good news for Mendeecees and Yandy, a federal judge is expected to shorten his sentence later this month, meaning it’s possible that he could be free again as early as 2018.

LHHNY How long will Mendeecees Harris be in prison?