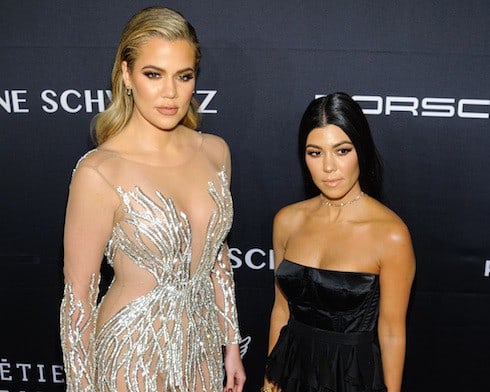 Khloe and Kourtney Kardashian have already taken Miami, and apparently the next step is…walking down the aisle at the same time? That’s the news according to an alleged surprise exclusive on the sisters, who have supposedly agreed on a double wedding: Khloe to her new boyfriend Tristan Thompson, and Kourtney to baby daddy Scott Disick.

In Touch is the source for the latest exclusive, in which an anonymous source appears to suggest that Kris Jenner’s solution for fixing “her family’s floundering brand” is to pair up her eldest unmarried daughters in a grand TV wedding extravaganza. And how does Kris plan to convince both Khloe and Kourtney to go along with her plan? It would appear that money, which the Kardashians are not short of, was the dominant factor.

“Kris knows Khloé and Kourtney will go for it when she shows them how much money they can make and how it would keep the family empire alive,” said the source, who apparently realizes how tired of the Kardashans people seem to be. “She knows Khloé is desperate to marry again, so she’s pushing her to wed Tristan.”

In addition, Kris is firmly in Scott Disick’s corner, and intends to simply tell Kourtney that he’s “a changed man.” Explained the source, “Getting married and becoming a proper family is the right thing [for Kourtney] to do.”

Savvy Kardashian observers noted the timing of the announcement in relation to Kanye West’s double on-stage meltdown, complete tour cancelation, and rumored assault of a hospital orderly (or a doctor, depending on your anonymous source of choice). Similar, but separate marriage rumors involving both Khloe and Kourtney cropped up last month, following allegations that Kim Kardashian had somehow faked the Paris robbery that saw thieves hold her at gunpoint and make off with $11 million in jewelry.