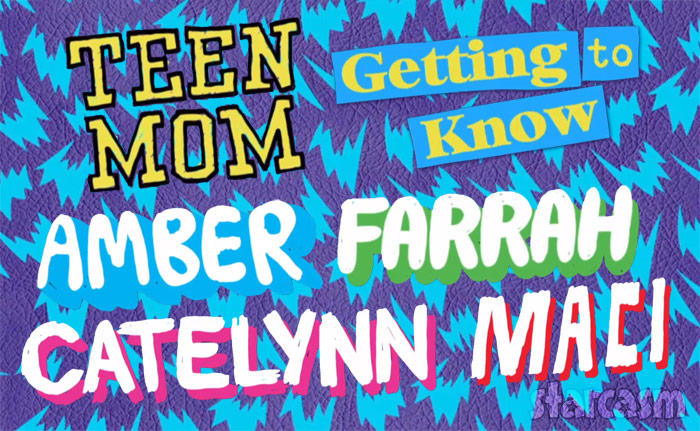 On Saturday MTV aired a series of four “Getting To Know…” specials featuring the moms (and some of the dads) from the original Teen Mom series who will be returning for Teen Mom OG on March 23. In the specials, the moms, friends, and family sat with MTV producers and watched clips from their episodes of 16 and Pregnant, Teen Mom, and the “Being…” specials from last year. The end result was four compelling hours of four completely different stories that not only served as a wonderful catch-up on how the moms and their lives have changed since first appearing on MTV as pregnant teens, but also helped transition viewers in to the refreshing new format of the show that breaks down the proverbial fourth wall completely and introduces the production crew (who apparently have been with the moms since the beginning) as part of the cast.

MTV has since been generous enough to make all four episodes available online, and we have them for you here. So, in case you missed them the first time around, or even if you just want to rewatch one or more of them, here they are along with very brief summaries:

Getting To Know Catelynn

Catelynn and Tyler’s story is nothing short of AMAZING, and it was captured by MTV, beginning with their selflessly heroic (but still heart breaking) decision to place Carly for adoption and including the high school sweethearts’ journey rising above their violent and dysfunctional environment to where they are now: mature adults with a newborn daughter and a wedding date this summer. And who better to relive this journey with than Cate and Ty?!? 🙂

Getting To Know Amber

Amber Portwood’s story is about as improbable a happy ending as you will ever witness on reality TV or in life. She was in a dark, dark place and had a LOT of obstacles to overcome. She OPTED to go to prison instead of continuing to participate in a drug rehab program that wasn’t working! But, if you are expecting to relive Amber’s Teen Mom episodes with her, this special is going to disappoint you because Amber refused to do that. Instead, Leah’s dad Gary Shirley’s stands in (or sits in) for what kind of turns out to be a “Getting To Know Gary” special within the “Getting To Know Amber” special.

It’s also interesting to see that despite Amber’s maturity, Gary can still push her buttons. But, as I mentioned in a previous post, it looks as though Amber now has the ability to step away and find a little balance instead of giving into the rage. Amber’s journey on Teen Mom OG promises to be perhaps the biggest question mark of the four moms.

Maci Bookout really seems to have her sh*t together, and I think her bearded beau Taylor McKinney is going to get a lot of #MCM mentions when new Teen Mom OG episodes air on Monday nights! Plus, Bentley watching Bentley is just about as awesome as it gets in my book! That being said, it is great to watch Maci and her friends (who reveal they didn’t know her when MTV began filming her for 16 and Pregnant) watch herself back when she didn’t have her sh*t together and still naively believed her and Bentley’s dad Ryan Edwards were heading for that happily ever after. (Where ARE her eyebrows?!?)

Getting To Know Farrah

A number of fans and even the other Teen Mom OG cast members were apparently very upset when it was announced by MTV that Farrah would be returning for the reboot after all, but after watching this special I hope everyone realizes that was ABSOLUTELY the right decision! Not necessarily in a good way, I guess, but Farrah and her family make for some jaw-droppingly entertaining TV watching! That scene where Farrah and her feather-haired mom Debra Danielsen are watching themselves fight on 16 and Pregnant and then they get into a completely new (possibly even worse) fight is just crazy! Farrah said it best when she said fans will be seeing her “roller coaster” life. No doubt that is true, and it is going to be nuts getting a glimpse into what her day-to-day life has really been like over the last few months.