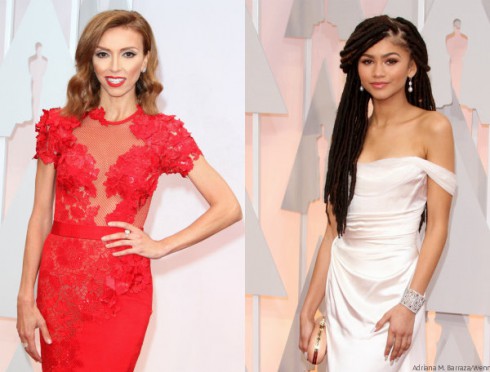 Even though she’s just 18, Zendaya Coleman displayed more maturity than Giuliana Rancic when the Fashion Police host criticized the Disney star’s dreadlocks after the Oscars.

The controversy began when Giuliana said Zendaya’s dreadlocks made her assume the teen smelled like “patchouli” and “weed.”

After hearing the diss, Zendaya took to Instagram to explain why she found the comment so inappropriate.

“There is a fine line between what is funny and disrespectful. Someone said something about my hair at the Oscars that left me in awe. Not because I was relishing in rave outfit reviews, but because I was hit with ignorant slurs and pure disrespect,” Zendaya said without mentioning Giuliana by name. “To say that an 18-year-old young woman with locs must smell of patchouli oil or ‘weed’ is not only a large stereotype but outrageously offensive. I don’t usually feel the need to respond to negative things but certain remarks cannot go unchecked.”

The K.C. Undercover actress cited inspiring women such as director Ava DuVernay, author Terry McMillan, historian Heather Andrea Williams and more who don’t “smell of marijuana,” even though they have locs. She added, “There is already harsh criticism of African American hair in society without the help of ignorant people who choose to judge others based on the curl of their hair.”

After Zendaya’s post (which quickly went viral), Giuliana tried to explain herself.

Dear @Zendaya, I'm sorry I offended you and others. I was referring to a bohemian chic look. Had NOTHING to do with race and NEVER would!!!

Many people who responded didn’t seem to be buying Giuliana’s apology. As one said, “oh dear…this was the least convincing apology. Try again. Crazy how much more mature an 18 yr old is than you.”

Do you think Giuliana’s comment was inappropriate? Was her explanation understandable?

Lindsay Lohan goes back to red!

90 DAY FIANCE Luis gets cornrows, is currently in New Jersey