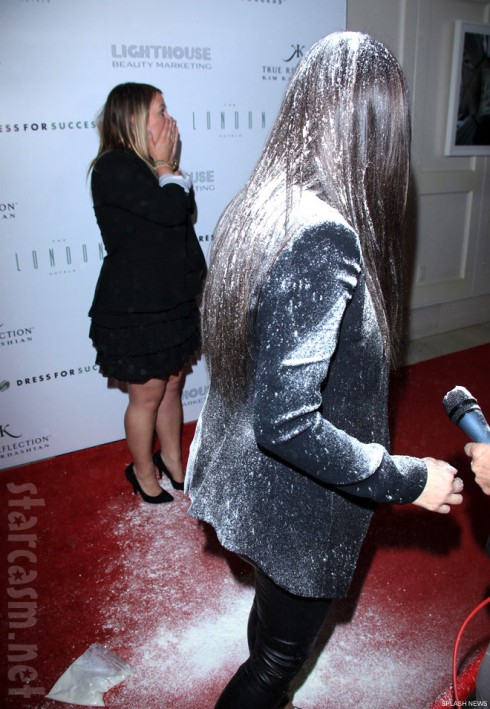 Kim Kardashian was attending the launch of her new True Reflection fragrance at a red carpet event held at the London Hotel in West Hollywood last night when an unknown woman walked up on her from behind, shouted “Fur hag!” and then dumped a bag of flour of the reality star. (It all happened so fast some in attendance mistook it for a marriage.)

Here’s a video of the incident obtained by TMZ:

The flour power assailant was detained by security as Kim casually walked off looking as though she had just left a party at Charlie Sheen’s house. After removing her jacket and dusting off her hair, Kim returned to the event and appeared to be in good spirits. Those good spirits extended to the flour bomber as Kim agreed to not press charges against the woman and she was released.

UPDATE – Kim is reportedly reconsidering pressing charges now. “I said earlier no I wasn’t [going to file a complaint],” she tells E! News. “I am just going to think about it, because I don’t want someone to think they can really get away with that. So we are going to handle that.”

“I was laughing it off earlier and, you know, I think that is the only thing I knew how to do at the time,” Kim admitted. “But I just think it is such a shame that someone like that…would ruin an event, or attempt to ruin an event, that was based around, not only my fragrance, but this organization, Dress For Success. I mean that’s what the event was about. These women flew in from all over the country to be a part of this event, that are underprivileged women, that really got the shine taken away from them a little bit. That’s why I am calling in now. I feel bad that it was kind of derailed from that.”

“Now that I think about it and had some time to digest it,” she added, “I think, ‘What if that was some other substance? What if that person had a dangerous weapon?’ It’s scary. And what’s even scarier is this woman acted as if she was a part of the press. She just came out of nowhere! And so we are definitely changing things up a little bit, amping up security, taking some measures, and…I’m gonna definitely deal with it because it is not acceptable.”

Here’s a photo of Kim prior to the dust up: 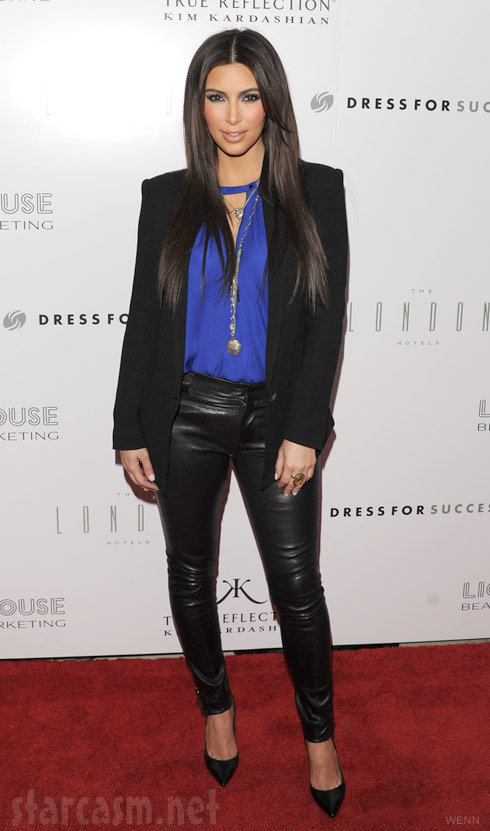 Is there anyone else out there thinking this may have been an inside job? Say what you will about the Kardashians, but they are marketing geniuses and I wouldn’t put it past them to stage a flour bomb incident to help promote one of their products. I’m just sayin!

You can buy a Kim Kardashian robbery Halloween costume