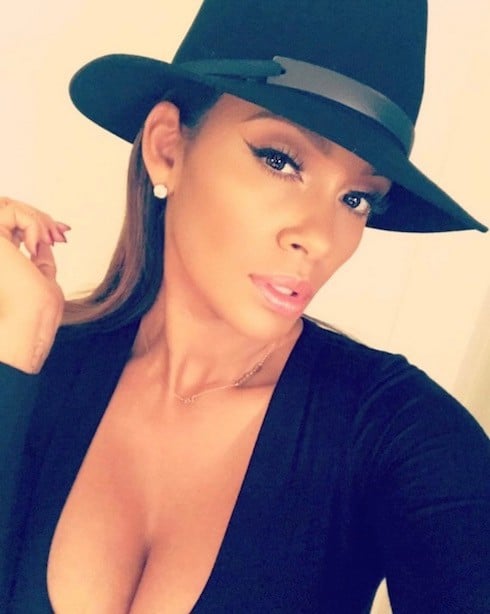 A pair of new reports have Basketball Wives fans wondering something that only months ago seemed unthinkable: Did Evelyn Lozada and Carl Crawford split? The pair got engaged back in 2013, but it’s been largely silent on the wedding front since then. “Split rumors” first surfaced last summer, though neither Evelyn nor Carl addressed them; before that, Evelyn explained why she wouldn’t ever get married on TV. “[Carl] doesn’t want to be a reality star,” she said, “He’s very, very private even before we met. I try to respect that.”

The Shade Room got the rumor mill churning this time around. According to TSR, the pair have split because Carl has been seen at four major family gatherings over the past few months–a birthday dinner in June, a Vegas outing involving a private jet, a July 4th soireé in Houston, and his birthday last weekend–but Evelyn wasn’t with him for any of that. At the same time, Evelyn “has also gone on vacations recently with her family,” sans Carl.

Once those allegations got people talking, Fameolous published a note they said had come direct from “Carl Crawford’s family.” The article doesn’t say which family member or members wrote the note, nor does the note say whether or not Evelyn Lozada split from Carl Crawford (or whether, given its allegations and tone, it was Carl who split from Evelyn). But the note sure doesn’t sound like something a happy family would say about their potential daughter-in-law.

My family and I have been trying to warn Carl for years about Black Widow Evelyn!! Between helping Antoine go broke after his one-hundred million dollar salary, ruining Chad’s career and now with Carl’s career over…this woman is TOXIC!!! We knew this would happen, which is why he hasn’t married her yet, not to mention she asked for a ridiculous amount on the pre-nup! Carl isn’t crazy, he stopped that wedding right away. They were supposed to get married December 2014 but that didn’t happen because of that pre-nup!

Evelyn is hungry for money! Trying to keep up appearances and her lifestyle. This would have never happened to our cousin if this THOTTY GOLD DIGGERY WITCH hadn’t gotten her claws into him. And, she keeps pressing him to have another baby! And the only reason why she wants another baby is so she can give him two children like Amy did! And we also know that she needs a storyline for that BORING show! Carl isn’t even affectionate with her. Baseball is his life and now its gone because of this raggedy woman. All she is doing is teaching her daughter how to be a gold digger too! WE ALL KNOW THAT YOU WERE WITH BABY FROM CASH MONEY BEFORE CARL EVELYN! And as soon as she got with Carl, she dropped Baby and told him to stop giving her money. SMH.

The worst part is she only got with him for a check because she has been telling friends for years that he isn’t attractive in the face. I’m so pissed that she would do our cousin like this! Carl will get back with Amy, he has told us! EVELYN IS EVIL…SHE HAS NOT CHANGED and she has everyone fooled, but we think people can see right through her because her show ratings suck! No one is watching! FAKE ASS.

It hardly seems fair to say that baseball is “gone” from Carl’s life because of Evelyn–he tore an oblique early in the 2015 season and missed almost three months, then was released by the Dodgers in the middle of the 2016 season with the team on the hook for the $35 million left on his contract.

And, on a note completely unrelated to any drama at all, the Basketball Wives Season 6 reunion special airs Monday night at 9 on VH1.