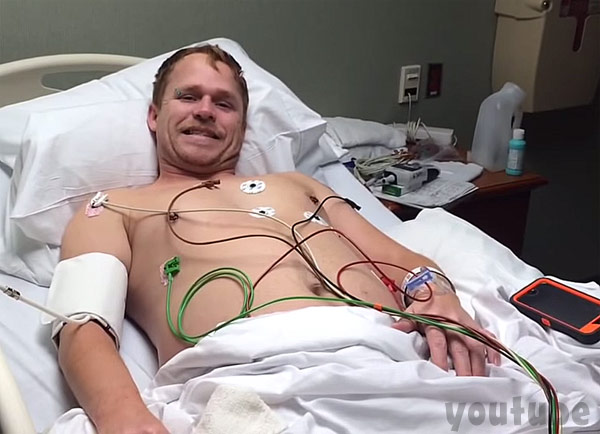 2015 got off to a pretty bad start for former Here Comes Honey Boo Boo star “Uncle Poodle” Lee Thompson as he had to be hospitalized after waking up on New Year’s Day with a dangerously elevated heart rate. He had to then be put under and shocked to get his heart back to normal, and later had a defibrillator installed. Adding insult to injury (almost literally) is the fact that he has heard nothing from his Honey Boo Boo kin aside from a few text messages from brother Sugar Bear.

According to TMZ, “Poodle says he specifically texted Mama June but she clearly was not on his ‘get well soon’ list.” The site adds that Uncle Poodle has racked up a $150,000 medical bill during his hospital stay and he doesn’t have insurance.

But all the bad news isn’t keeping Uncle Poodle down! He and fiancé Alan Stevenson are continuing to post Youtube videos giving fans a glimpse of what an Uncle Poodle spin-off reality series might look out and the latest installment features 11+ minutes of The Poods in his hospital bed talking about third t!tties (his defibrillator) and getting his chest shaved by a nurse.

So what do you think? Would you tune in for Here Comes Uncle Poo Poodle? 😉

Will TLC cancel 19 Kids and Counting because of Josh Duggar?