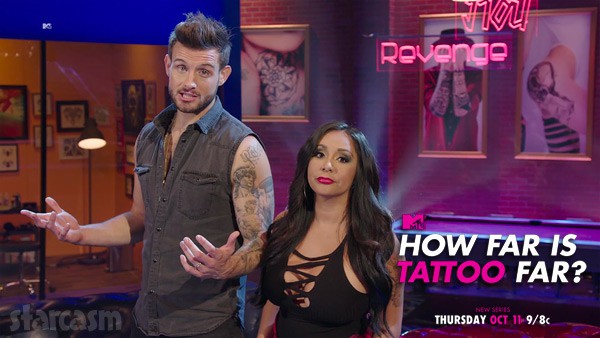 What do you get when you mix a trust fall with a tattoo parlor? You get MTV’s newest reality series How Far Is Tattoo Far? Hosted by Jersey Shore‘s Nicole “Snooki” Polizzi and Younger actor Nico Tortorella, the show features couples, besties, and family duos who are willing to design tattoos for one another and have them done without either of them knowing or seeing anything until it’s over!

The concept is taken from MTV’s international hit series Just Tattoo Of Us, which, in its first two seasons, has already built up quite the museum of jaw-dropping and head-shaking disasterpieces, in addition to mutually approved — and sometimes downright heartwarming — designs.

More on the show and the concept from MTV:

Based on the hit MTV international format Just Tattoo of Us, How Far Is Tattoo Far? puts relationships through the ultimate test of trust by asking pairs of friends, family members and couples to design tattoos for one another that won’t be revealed until after they’ve been permanently inked.

Hosted by Tortorella and Polizzi, and with the help of some of the most creative and talented tattoo artists in the industry, the series will follow the blindfolded duos as they learn the stories behind the tattoo and unveil the designs unknowingly selected for them.

In addition to having Snooki as host, How Far Is Tattoo Far? Season 1 will feature numerous other members of the MTV family who are willing to be blindfolded and get in the chair! Snooki’s Jersey Shore co-star Angelina Pivarnick will go under the needle with her fiancé Chris Larangeira, as will Floribama Shore gal pals Nilsa Prowant and Aimee Hall, and The Challenge stars Cara Maria Sorbello and Paulie Calafiore.

Here’s a little preview of Angelina’s episode, which teases a shocking result — complete with a single image recap:

.@angelinamtvjs, BRACE YOURSELF! Things are about to get tatTOOMUCH for you to handle! ? | Check out this sneak of How Far Is #TattooFar? hosted by @snooki and @NicoTortorella airing Oct 11th, on @MTV! ? pic.twitter.com/SQH5D89Wpu 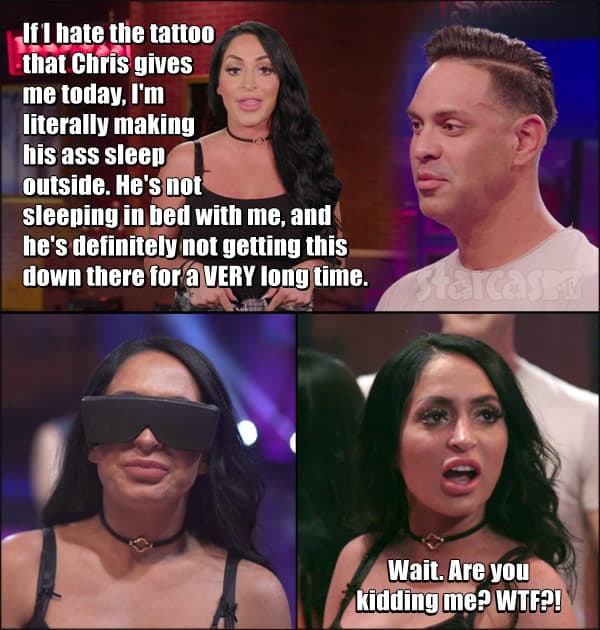 And here is the official How Far Is Tattoo Far? preview trailer:

Choosing a tattoo for someone is all fun and games until they have the same power to choose yours! ? Catch the premiere of How Far Is #TattooFar? hosted by @snooki and @nicotortorella Thursday, Oct 11th on @MTV! ? pic.twitter.com/0oNSYkaQW7

How Far Is Tattoo Far? premieres Thursday, October 11 at 9/8c on MTV!