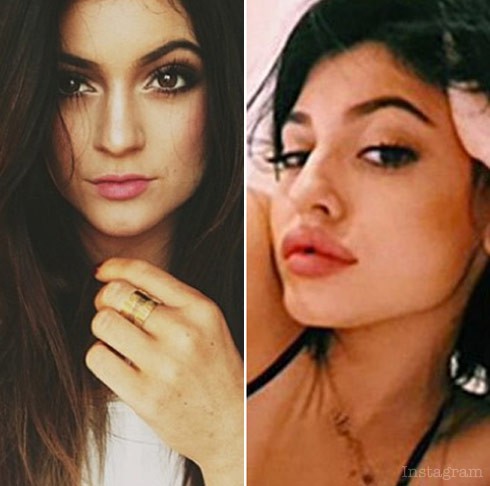 They’re not real, and most people don’t think they’re spectacular, either: Kylie Jenner is facing a huge backlash, following yesterday’s revelation that her lips are not real. What this means, obviously, is that the #LipChallenge is dead, and everyone who’d been thinking about taking it can rest easy with the knowledge that their lips will stay healthy and their faces won’t be lacerated by broken shot glasses. Kylie herself responded to the Challenge a couple weeks back, with a pretty banal statement about how “people/young girls like me [should] be YOURSELF & not be afraid to experiment w your look.”

To be frank, that is a pretty hypocritical thing to say just a couple of weeks before you admit that your own experimentation involves modifications way more extreme than sucking on a shot glass. And people–both fans and critics of Kylie–are not pleased with her. Here’s a sampling of some of the more fun reactions to her admission:

Anyone who thinks Kyle Jenner’s lips are real is an IDIOT. Also, KIM’S BUTT IS AS FAKE AS HER FACE. #notreal #lipchallenge #BreakTheInternet

“WAIT, SO I SUCTIONED THE SH*T OUT OF MY LIPS WITH A SHOT GLASS FOR NOTHING?!” -14 year old girls across the U.S. #lipgate

What a surprise @KylieJenner has lip fillers, that’s fine, just don’t lie & cause this disgusting #lipchallenge to happen! #rolemodel #not

Kylie Jenner is a loser #lipgate

What do you think? Did you take the #LipChallenge, or are you just happy that it’s dead? Are you happy to see #LipGate becoming a thing, and Kylie getting raked over the coals because of it?