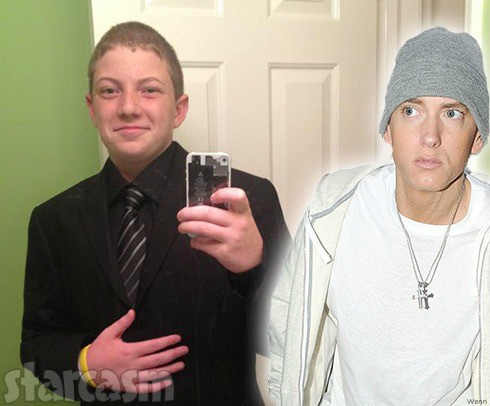 When thousands online got the #GetGageGarmotoMeetEminem hashtag trending, Marshall Mathers took notice. Then, quietly, he made the wish come true.

According to the Detroit Fox news station, 17-year-old Gage Garmo has been battling Osteosarcoma, a very rare form of bone cancer, throughout high school. His classmates said he was a big inspiration to them all because of his positive attitude, so the whole community was very saddened to learn last week that Gage likely only has days to live.

Hoping to make Gage’s “last wish” come true, they teamed up to get Eminem’s attention… And, although Eminem may come off like a tough guy, he was reportedly won over by the campaign.

TMZ reported Eminem arranged to swing by Gage’s home on Sunday evening, but “was adamant he did not want the visit to become a media spectacle.” The pair spent an hour alone together and the “whole thing meant a lot to Gage, who was in good spirits during the visit and after.” Fox also reports that, although Eminem lives nearby, he was in Atlanta when he received word of Gage’s request — and made a special trip back to meet the special teen.

UPDATE Gage passed away on Monday, one day after meeting Eminem. He would have turned 18 four days later.