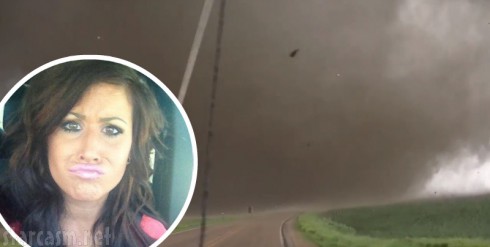 Teen Mom 2‘s Chelsea Houska and her family found themselves in a place no one wants to be this week: In the midst of a multi-day tornado outbreak.

The Sioux Falls single mom was more than 100 miles from the EF4 twin tornadoes that killed two in the small Northeast Nebraska town of Pilger. Another strong tornado ripped through the South Dakota town of Wessington Springs, 125 miles northwest of Chelsea’s home.

A bit closer to Sioux Falls was the Tuesday night EF2 tornado in Humboldt, only 20 miles away. Scariest of all for Chelsea was the Monday-night tornado touchdown just five miles from her. (As someone who’s spent the vast majority of her life in tornado alley, let me confirm how scary these outbreaks really are!)

“@PapaRandlicious: Ugh, in the bullseye again. @ChelseaHouska was 5 miles from a tornado touchdown last nite pic.twitter.com/iBfK6pqVAP”

Chelsea’s dad also shared this video from another Monday storm, which he said was 30 miles from his house in Vermillion.

It sounds like all the Houskas are safe and no damage was done to their homes… Unfortunately, the same can’t be said for many others in the area.