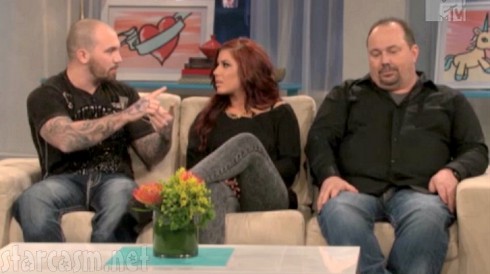 Teen Mom 2‘s Adam Lind says he has a simple explanation for his treatment of Chelsea Houska throughout the past five seasons: She “scarred him for life” by sleeping with his brother and best friend.

“Do you know why I was an a**hole?! Chelsea, you did horrible things to me,” Adam says in a sneak peek from the Teen Mom 2 reunion with Dr. Drew. “When she was pregnant with Aubree, she slept with one of my best friends that I went to high school with. While she was pregnant with my child.”

Randy Houska, who was seated on the other side of the couch, noted Adam did the same thing to Taylor Halbur while she was carrying their baby. Adam disregarded Randy, instead making a point that Chelsea’s actions “scarred me for life.”

“Same for you,” Adam shot back. “Chelsea, you’ve slept with my brother.” (Did some quick research on Adam Lind’s brother, who hasn’t appeared on Teen Mom 2. He keeps a pretty low profile and got married last fall.)

“But this was all before you,” Chelsea said.

Randy added, “Exactly. Before she even knew you.”

Chelsea then accused Adam of not accepting any responsibility for his own actions and said he’s always going to blame her.

“No I’m not. At all,” Adam said in defense. “I’m just saying all we focus on is what I have done wrong. And all you guys focus on with her is what she’s done right.”

Ending the clip, Randy said, “I’m all in favor of him being a good dad and turning his life around. But I’m skeptical.”

Since the clip was released, neither Chelsea nor Randy have mentioned it on Twitter. But, a new Vine video Chelsea posted earlier today seems to be pretty telling… (F-bomb alert.)

Why is Jenelle Evans in the hospital? ‘Inside source’ shares details