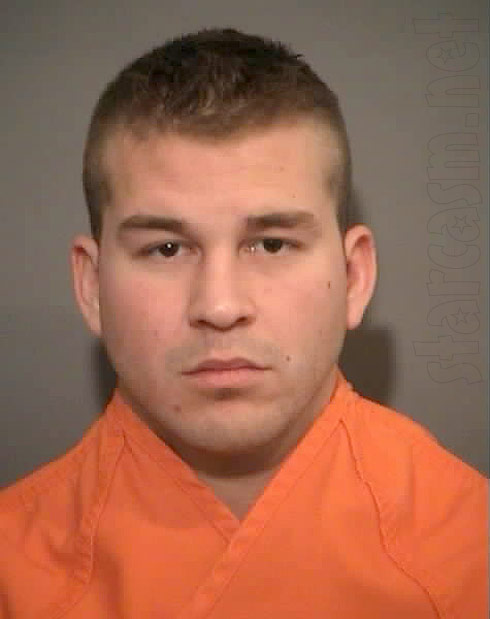 Jenelle Evans’ boyfriend Nathan Griffith is currently in jail, reportedly after a court date for his DUI arrest (his third) in September that was featured in last night’s episode of Teen Mom 2.

According to online records, Nathan was booked by the Horry County Sheriff’s Department just before 11AM this morning. His charges and his sentence are not listed online, though it is being reported by several sources that he was sentenced to 60 days behind bars.

If that is correct, then Nathan should be out again prior to Jenelle giving birth to their son Kaiser. Jenelle revealed in January that her due date is June 29.

Above is Nathan’s latest mug shot, which is remarkably similar to his previous one from September. (Though there are some subtle differences.)

It appears as though the couple’s trip to Raleigh last night to see Miley Cyrus was a bit of a last hoorah for Nathan, who must have known that his court appearance today had a good chance of resulting in jail time (which he mentioned on last night’s episode).

We will update as soon as we know more.

UPDATE – The court records are now available and it looks as though Nathan wasn’t jailed today for driving under the influence, but for other charges stemming from his DUI arrest such as resisting arrest, driving with a suspended license and threatening an official in performance duty. The DUI charge appears to still be pending. (There is a “traffic jury trial beginning date” listed as May 5, 2014 — so perhaps Nathan will be trying his luck with the DUI in front of a jury? Do they actually have juried traffic offense cases? Thankfully I’m no expert on these things.)

Here are the charges Nathan did plead guilty to earlier today followed by the sentences for each. (It appears as though the various sentences are concurrent, so Nathan could be out as early as May 9, if not earlier with a suspended sentence. Once again, I am no expert, with all my experience coming from blogging about celebrities with a propensity for legal troubles.)

Driving under suspension, license not suspended for DUI – 2nd offense

Driving on wrong side of road

And the pending charge:

Driving under the influence, .08, 3rd offense