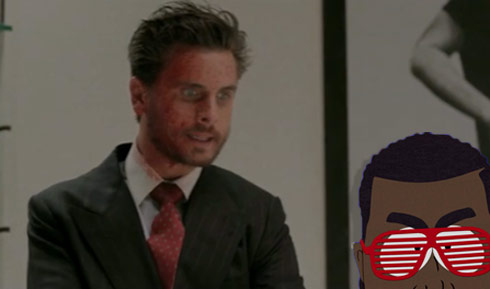 New dad Kanye West has decided to involve his baby-momma’s family and best friend in the promotion of his other new baby, his latest album Yeezus.

In the following wonderfully strange clip that loads up when you head to kanyewest.com we see Kim Kardashian’s BFF Jonathan Cheban and Kourtney Kardashian’s baby-daddy Scott Disick in a random shot-for-shot remake of an unforgettable scene from the film American Psycho. Disick takes the part of Christian Bale (Patrick Bateman) who murders Jared Leto’s character (Paul Allen) portrayed by Cheban.

In true Kanye fashion, Disick’s character is brought to a murderous rage over his obsession with the awesomeness of Yeezus (in the original it was Huey Lewis and the News).

Kanye made headlines when he was setting up projections of this very clip on to the facades of famous building across the globe. Down in Texas, the folks at The Alamo weren’t so hot about the idea and the fans gathered got turned away and denied their opportunity to see Disick’s acting chops.

Just in case you missed the original (it’s a great film y’all), here’s that clip for comparisons:

“Yeezus is a pornographic, self-indulgent, self-parodying, incisive, funny, sickening, and (yes) brilliant unpacking of West’s pre-fatherhood self. The most singular and stunning entry yet in the most singular and stunning discography for any pop artist in the 21st century — it’s not even close, really — Yeezus amounts to a no-holds-barred accounting of who Kanye West must now protect his family from: Kanye West. It took months for him to make; it may take a lifetime for him to live down.”

I can’t decide if I like Disick more as a Bale murderer-imposter or a cover boy for young adult books?