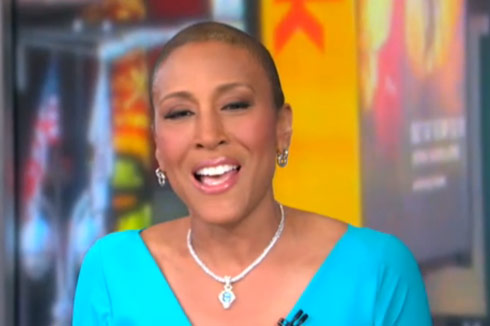 Just 5 months after undergoing a bone marrow transplant, Robin Roberts is back on TV this morning with Good Morning America.

The popular host is in the process of recovering from MDS, a blood and bone marrow disease. She sported cropped hair and looked slightly frail from her battles but displayed the glowing smile and enthusiasm that has endured her to so many fans.

Here’s the clip in which Robert says, “Hi, it’s Robin and I’ve been waiting 174 days to say this, “Good morning America!”

In a special surprise, Roberts was welcomed back in a taped statement from President Barack Obama and First Lady Michelle Obama. The network announced that Roberts will be interviewing the latter later this week.

Robin’s fortitude was tested deeply during her illness as her mother passed last summer just as Roberts took her hiatus from the show. GMA has been documenting Robin’s recovery after she received a life-saving bone marrow transplant from her sister Sally-Ann.

According to an article via The New York Times citing industry research Robin is, “the most-liked host on any American morning news show by a wide margin.”