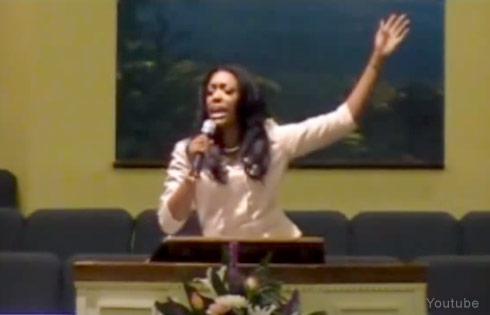 Before she was an aspiring singer, star of The Real Housewives of Atlanta, or even the wife of Kordell Stewart, Porsha Williams was… an evangelist?!? Yep! Check out these video clips of “Evangelist Porsha Stewart” as a “guest speaker” at High Praise Christian Center Ministries in Lithonia, Georgia in 2010!

The first has been edited down by TMZ to highlight Porsha’s sure-to-be-controversial comments about gay people. “So don’t let the devil tell you you aren’t worthy of God’s blessings,” Porsha says in the clip. “He wants to use you no matter what! That’s why we Christians are supposed to be telling the hooker on the street, the drug dealer, the person who in the hospital trying to commit suicide, the gays, the lesbians — we’re supposed to try and save them!”

And here are some more lengthy clips of Porsha preaching: