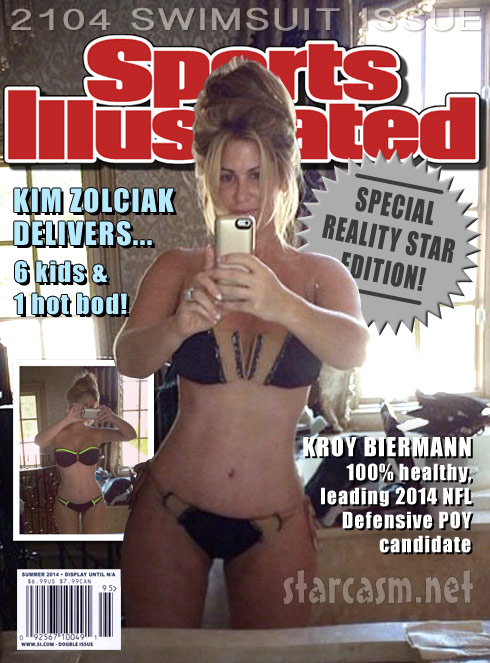 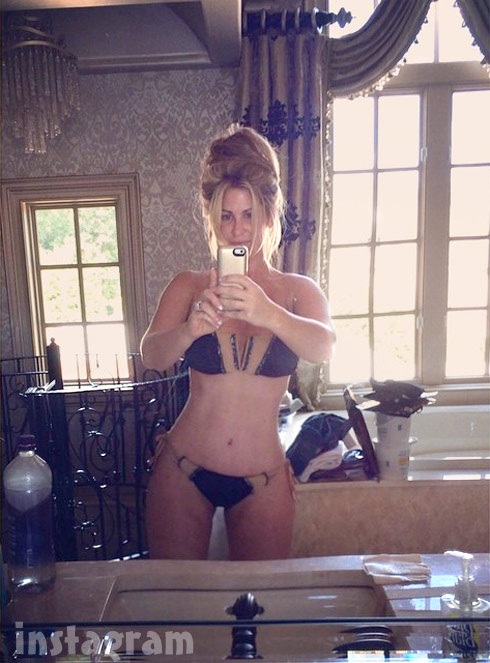 Kim posted the photo above and wrote, “Obsessed with @beachbunnyswimwear took my boys swimming today! They missed daddy throwing them up in the air and when I attempted to do it … Well.. Let’s just say they didn’t go very far!! #nomakeup #natural”

She later added another photo in a different swimsuit and captioned it, “Another @beachbunnyswimwear I tried on today!!! Im obsessed with swimsuits! I won’t even tell u how many I own!! #beenthesamesizemyentirelife Even after 6 kids!! #grateful #curvalicious” 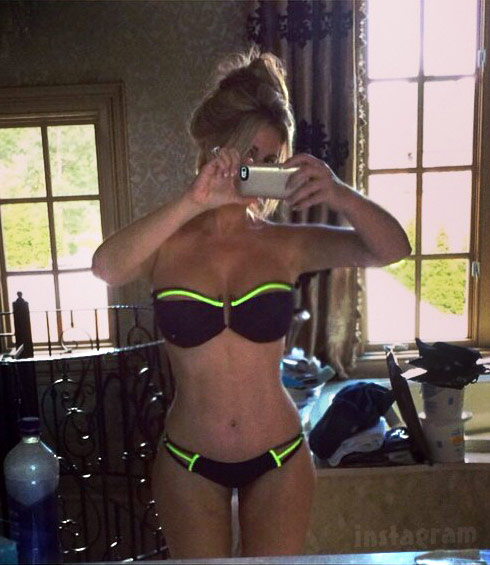 So how did Kim lose the reported 50 pounds she gained during her recent pregnancy with twins Kane Ren and Kaia Rose? “She exercises a lot and uses Xenadrine [a weight loss formula],” a source tells E! News. “She eats a lot of fruits and vegetables as part of her diet…She does not focus on how much weight she loses, she focuses on figure rather than pounds.”

In a recent interview the 36-year-old reality star told E! News of how she has been able to lose weight after each of her five pregnancies: “I definitely think genetics play a role, that’s number one.”

So what’s number two? “I think with twins that every little morsel of food that you eat…goes to the baby. I made two human beings at the same time and I gained 50 pounds. Which I gained 50 pounds with KJ, so the twins, I think they took it from me,” Kim explains.

And is there a number three? Yep. “I do wear kind of like a homemade-type girdle after I had the babies, for six weeks, and I’m wrapped so damn tight for a period of time—and it makes your stomach flat as a board.” Anyone else remember the body wrap Kim tried on an episode of The Real Housewives of Atlanta? At the time I thought her aversion to exercise and attempt to find an easy solution was a little silly, but it’s hard to argues with the results!

You can see more (actually, less) of Kim Zolciak and her family in new episodes of Don’t Be Tardy airing Thursday nights at 9/8c on Bravo.