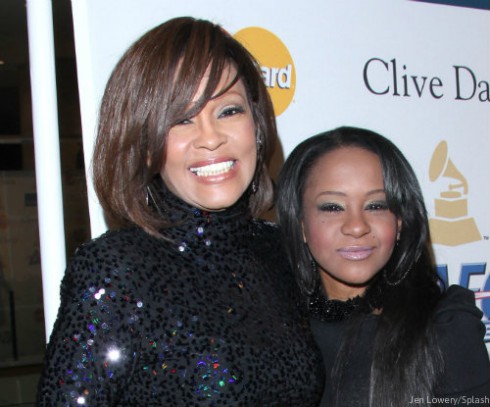 Whitney Houston’s New Jersey gravesite is being redone to indicate the inclusion of daughter Bobbi Kristina, who remains in hospice care in a facility outside Atlanta.

According to the latest report, Bobbi Kristina will be buried in the same plot of land as her mother Whitney Houston, in Westfield, New Jersey. Houston’s headstone now includes two new rosary necklaces, and a circular brick border garden crowns the plot.

In addition, Radar Online reports that a new sign has been added to the rear left side of the grave–”Love” is the sign’s simple message.

The two can’t be buried side-by-side, though, as the report’s source indicates that “The graves around Whitney are occupied.”

Instead, the theory is that “Bobbi Kristina’s remains could be placed atop Whitney’s coffin, with mother and daughter together into eternity.” Given the strong bond the pair shared in life, and the influence of Whitney Houston’s unexpected death on the trajectory of Bobbi Kristina’s life, the shared grave would appear to be fitting.

According to the latest reports from the Peachtree Christian Hospice in Duluth, Bobbi Kristina shows “barely any signs of life,” and death is “imminent” for the 22-year-old. Her family has put aside their differences and raced to be by her bedside in her final days.