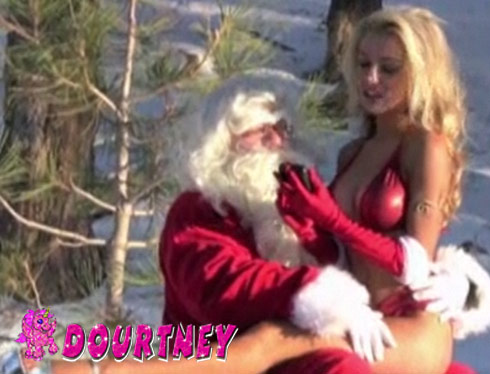 Courtney Stodden put on a skimpy bikini and sat on the lap of Santa Claus and put the ho ho ho in holiday cheer.

In the following staged photo / video shoot of the “anything for a little attention” couple of the year, Doug Hutchison and Courtney managed to take their creepy love next level by perverting all of our innocent childhood memories of Santa Claus.

Just in case you didn’t catch it or you were too busy wiping the blood from your eyes, that is Courtney’s old man-husband Doug displaying his acting chops as Jolly ol’ Saint Nick.

From the beginning of this marriage I was fascinated but I’ve also frequently stated that the couple’s fame-train is short lived because once Stodden turns 18 in less than a year what’s left of any scandal will be gone. The two would be well advised to get what they can while they can. Also, I’d politely ask that they quit defiling holidays.

I don’t want to see Court in a Bunny suit making bad jokes about skipping down a happy trail with Peter’s cotton tail. Oh wait, yes I do!