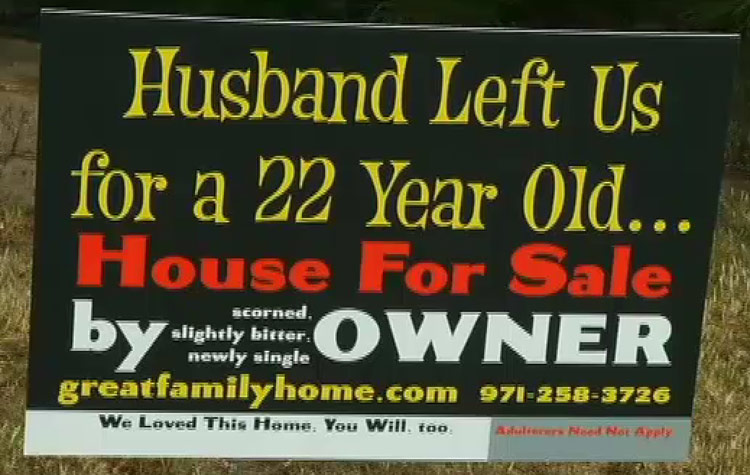 Hell hath no fury like a woman scorned and who needs to sell her house!

Elle Zober from Beaverton, OR went seriously next level when she decided on the signage she would use in attempts of helping to sell her home. It reads in part:

“Husband left us for a 22-year-old. House for sale by scorned, slightly bitter, newly single owner. Adulterers need not apply.”

Elle spoke with FOX 12 saying, “I want everyone to know I am hurt. I am scorned.  I am bitter. I am sad.” Here’s the report (can take a moment to load):

Zobler said she recently got divorced from her husband of almost 10 years. The past 7 years they lived together in the home she’s trying to sell along with their two children. She argues it isn’t about bitterness but “truth in advertising.”

She launched a website in which she really unleashes her feelings in what has to be my all-time-favorite sales pitch:

We did everything right.  Married ten years.  Two kids: one perfect boy, one bouncy, perfect baby girl.  We had almost no debt outside of our cars and we bought a house…. but, as with many marriages, our story ends in divorce.  I’m not sure how this all happened… but, all I can is that as soon as your husband/wife starts using new texts languages like :/, or starts talking to you like a college kid…. check your phone bill – you’re probably going to be in for a surprise.  For me that surprise came in the form of a 22-year-old college student who likes yoga… and, other people’s husbands.

The idea for the sign was truly only to help SELL OUR HOME.  The ex needs a place of his own, so he can plant his roots and move forward crafting a “Daddy House” with the kids – and *I* need to find a more affordable place so that the kids and I can carve out our own happy place.  This is a process for all of us – and the kids will thrive best when we are both in comfortable surroundings.  I hope that makes sense…..

That’s the thing about cheating/divorce…. as a woman I’ve lost soooooo much more than just a husband and a friend – I lost all my financial stability, retirement, etc…… It’s a rough and humbling place to be at 37 with two beautiful kids in tow – so where anyone thinks exposing this pain and loss is exacting some kind of “revenge”… well, then apparently I suck at getting “revenge” about as much as I apparently sucked at being his wife. lol 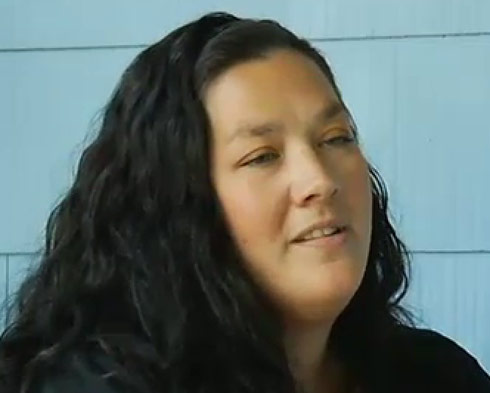 Dang girl! As for her no-good, cheating ex? She stated he has no problem with the sign as long as it sells the home adding that neither one of them want to end up in foreclosure. Wow, what a great and understanding piece of crap cheater.