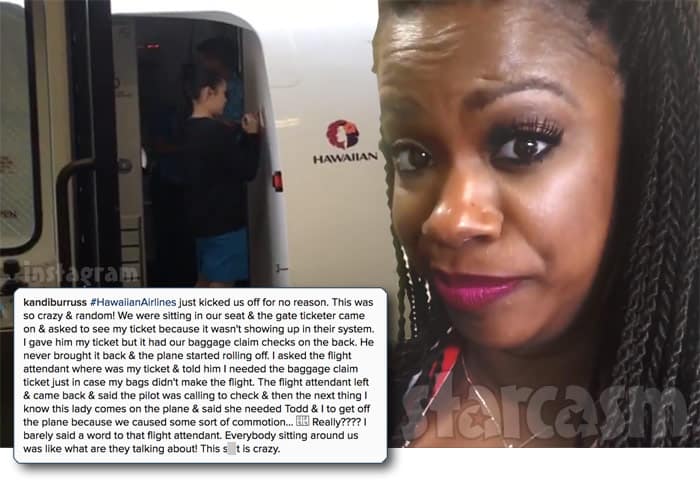 The Real Housewives of Atlanta star Kandi Burruss is all alo-hot and bothered after she and husband Todd Tucker were kicked off a Hawaiian Airlines flight for reportedly causing a “commotion.” The reality star posted a video on Instagram just after getting the boot and explained what caused her to get the “Girl bye” from the airline:

#HawaiianAirlines just kicked us off for no reason. This was so crazy & random! We were sitting in our seat & the gate ticketer came on & asked to see my ticket because it wasn’t showing up in their system. I gave him my ticket but it had our baggage claim checks on the back. He never brought it back & the plane started rolling off. I asked the flight attendant where was my ticket & told him I needed the baggage claim ticket just in case my bags didn’t make the flight. The flight attendant left & came back & said the pilot was calling to check & then the next thing I know this lady comes on the plane & said she needed Todd & I to get off the plane because we caused some sort of commotion… ? Really???? I barely said a word to that flight attendant. Everybody sitting around us was like what are they talking about! This sh!t is crazy.

Here is a transcript of what Kandi says in the clip, which is essentially the same as her caption above:

Never ride Hawaiian Airlines. They just kicked us off of the plane for absolutely no reason. Like, it’s ridiculous. I was sitting in my seat. Their people came and said that our seat wasn’t registering or something. So they took our ticket and walked off the plane. But, my ticket had my baggage stub on the back. So, when the other guy came and the plane started rolling off, I said “Hey, we don’t — you know, he never brought us our ticket back. It has our, you know, baggage claim stub on it.” And so they went to call and then they came back and was like: “Well, the pilot decided he wanted to kick us off the plane because we caused so much commotion.” I didn’t even say anything! So, never… Delta, this is a problem. We connected —

The comments section of Kandi’s video post is mostly filled with sympathy and/or outrage on her behalf, although a few commenters openly wonder if Kandi might be downplaying the ruckus she caused. And then there was this comment from someone claiming to work for an airline who says that gate agents commonly ask for tickets from celebrities to keep as a souvenir:

@kandiburruss I work for a major airline and the gate agent who took your ticket, probably wanted to keep it as a souvenir. This is common amongst gate agents and flight attendants. But what happened was no reason to kick you off of the plane! I smell a lawsuit. And just a tip, your baggage claim number is in your reservation. A lot of passengers don’t know this and they get very nervous if they lose their claim tags.

Meanwhile, Kandi and Todd’s RHOA co-star Peter Thomas, who was apparently on the same flight sitting right beside Kandi, shared this photo of the couple before they got ejected: 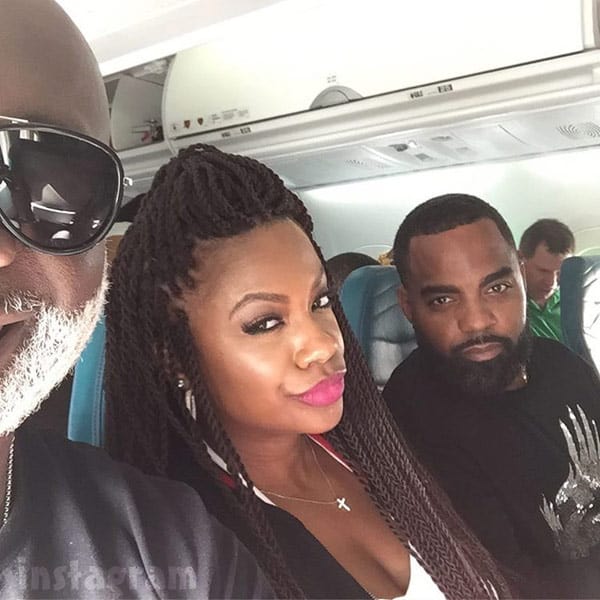 “NOT HAPPY WITH THE BULLSH!T THAT JUST HAPPEN…..” Peter wrote. (Apparently, Peter did not feel the same as he appears to be grinning from ear to ear.)

A few questions I have: What happens when you get kicked off an airplane? Do you get a refund for your ticket? Is it then up to you to find another flight? I guess I should be glad I don’t know the answers!

This has nothing to do with anything, but while writing this story, all I could think about was Sheree Whitfield at the airport at the luggage counter asking, “Who gon check my bag?”