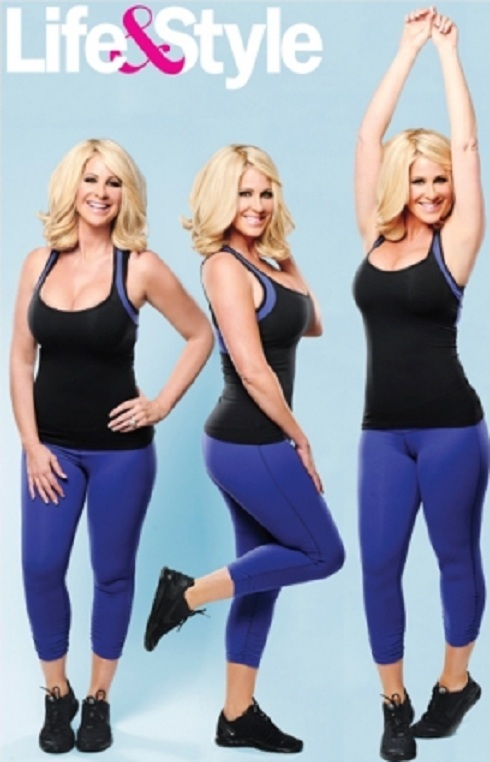 Kim Zolciak recently shed one super popular reality show from her agenda and now, she’s shedding the pounds! The former Real Housewives of Atlanta star and mommy of four has dropped an impressive 30 pounds just four months after giving birth to her youngest son Kash Kade and now, she’s showing off her slimmed down figure.

“I’ve lost 30 pounds,” Kim tells Life & Style. “I’m only 5 to 8 pounds above my weight before I got pregnant.” Kim, who recently landed her own spin-off deal with Bravo, credits her busy schedule with getting back in shape so quickly. “I never sit on the couch,” she explains.

“I think breast-feeding helped me lose some weight,” she adds, “and I was really busy as soon as I got home with Kash. I went straight into filming my spin-off show, Don’t Be Tardy… [which returns to Bravo in the spring], and I’m sure that helped. I just never sat still!”

As for what diet tricks she’s used to slim down, Kim says, “I don’t eat red meat or pork or much dairy, and I always eat in moderation.”

While she may look to be perfect form, Kim still has a little ways to go before she reaches her target size. “I’m a size 4 right now, and my goal is to get down to a size 2,” Kim states. “I’m accepting that I’m going to have to hit the gym — my girls [Brielle, 15, and Arianna, 11] laugh and say there’s no chance, but I really think I’m going to have to.”

* For those Real Housewives conspiracy theorists out there (you know who you are!), Kim daughter Brielle shared a photo of her mom just two weeks after giving birth to Kash in which she looks pretty much exactly like she does above. Perhaps that 30 pounds is just hidden by the angle of the photograph?