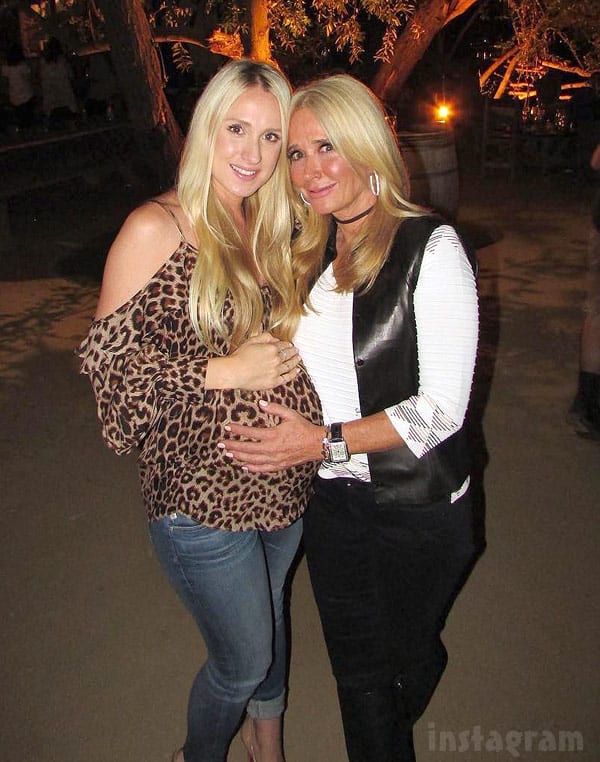 The Real Housewives of Beverly Hills star Kim Richards is now a grandma after her daughter Brooke Wiederhorn reportedly gave birth to a baby boy!

According to multiple sources for E! News, Brooke and her husband, Fatburger heir Thayer Wiederhorn, welcomed their baby son Wednesday evening just before midnight. So far, there has been no confirmation from Brooke or her family on social media.

Something there has been a lot of on social media since the couple’s pregnancy announcement back in March is Brooke Wiederhorn baby bump photos! So we’ll end this congratulatory post with tons of pictures of Thayer and Brooke’s little bundle of joy still cooking in the oven — including a few more with Grandma Kim:

Since the day I gave birth to you Brookie I have loved and enjoyed being your Mommy?watching you grow and all Our special moments with you together. I can't for you to experience the same love and joy with your baby???? Sharing this part of your life with you means the world to me!!❤️ #motherdaughter #love#baby#grateful #grandma @brookewiederhorn

A mothers joy begins when new life is moving around inside… and those playful kicks that remind her she's never alone… NANA waits for those moments too???❤️ @brookewiederhorn

I love ❤️ this so much… My son-in-law @thayerwiederhorn celebrating his birthday? last night, LOVING My Girl ?? @brookewiederhorn & Their Baby Boy ????

How cute is this? ❤️ @taylorwiederhorn thinks he's pregnant too!!?? must be that Twin thing @thayerwiederhorn @brookewiederhorn ???? #birthdayboys #twins #uncle ?

It's Amazing how much we love him already???? as I look at this picture, I see his ?Mommy looking down with so much love❤️ Grandma , kissing & holding him already.. And Auntie Whitney can't get close enough!! Soo much love❤️ won't be long now till he's in Our Arms!! #love #mommy #grandma #auntie #babyboy @brookewiederhorn @whittlesdavis

Pool day with my sister ??

Bumping around the city ?

I can't wait to meet you little one ??? #BumpDay

So nice to have my aunt & cousin in town for the weekend ?! Love you guys! ?

Celebrating our birthday girl @kcjay ? We love you! ❤️

Happy birthday to the most amazing mom in the world! I know you will be an even more amazing grandma!! I love you! ????????