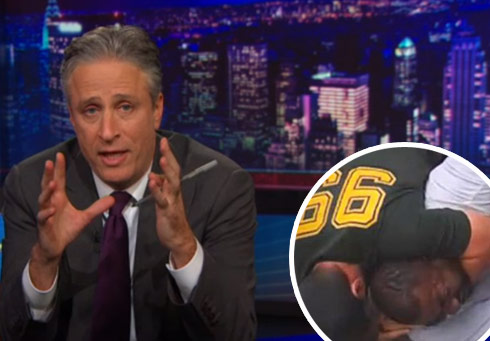 Last night thousands took to the streets of New York City to protest a grand jury’s decision not to indict NYPD officer Daniel Pantaleo after he was seen on video placing what appears to be a chokehold (a tactic banned by the NYPD code) on an unarmed Eric Garner that directly resulted in his death.

Via The New York Daily News:

Eric Garner, the Staten Island dad who complained that he couldn’t breathe as he was subdued by cops, died from compression of the neck, the medical examiner said Friday.

The autopsy also found that compressions to the chest and “prone positioning during physical restraint by police” killed Garner. The manner of death, according to the medical examiner, was homicide.

The autopsy also determined the victim’s asthma, obesity and high blood pressure were also contributing factors in his death.

Garner, a father of 6, was accused of selling loose cigarettes and he resisted arrest. Garner had a history of run-ins with law enforcement that included over 30 arrests dating back to 1980 on charges such as assault, resisting arrest and grand larceny.

Here’s a link to the video of Garner’s last living moments that brought national attention to his case.

As protesters marched, Jon Stewart opened The Daily Show with a monologue that has been going viral as the host found himself at a loss over the decision:

If comedy is tragedy plus time, then I need more f***ing time. But I would really settle for less tragedy, to be honest with you. I think what is so utterly depressing is that none of the ambiguities that exist in the Ferguson case exist in the Staten Island case. And yet the outcome is exactly the same: no crime, no trial, all harm, no foul…The coroner called it a homicide, the guy isn’t acting threatening, and we know that not through witness testimony from unreliable bystanders but because we are f***ing watching it. Someone taped it. We are definitely not living in a post-racial society. And I can imagine there are a lot of people wondering how much of a society we’re living in at all.

The Patrolmen’s Benevolent Association leader Pat Lynch argued there was no chokehold and that Garner’s actions were partially responsible for his death. “We believe, however, that if he had not resisted the lawful order of the police officers placing him under arrest, this tragedy would not have occurred,” he said.

VIDEOS PHOTOS Who is Trevor Noah, the new host of The Daily Show?